Last Friday my husband, Justin, and I took our two kids to my parents' house in northern Wisconsin. The six+ hour drive from Chicago wasn't exactly fun, but it was worlds apart from the days when we constantly had one of the kids facing away from us in a car seat screaming bloody murder. Neither of my kids were big car seat fans. Who can blame them? They're both still in their boosters, but only complain when they were bored, which seems to be about every 15 minutes. We deal.

As far as keeping up with exercise, I just use the road my parents live on. The upside is that it's quiet, hilly and surrounded by trees. The downside is the shoulder of the road is fairly grassy, which doesn't sound like a big deal...until you've encountered woodticks. The only time I run on the shoulder is when there is oncoming traffic. Last year I came back from a run, jumped in the shower and saw that a wood tick nuzzled its way into my ankle around my sock line. I have a completely irrational fear of spiders - I'll admit that. While ticks are technically not spiders - they're arachnids, they look a lot like them. What's a girl to do when she finds a tick on her ankle in the shower? Call for her mother, of course, who promptly came over rolling her eyes and got rid of it. Disgusting! 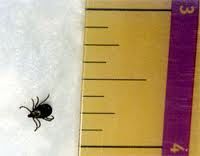 A woodtick. Wouldn't you freak out if you found one burrowed in your ankle?

As for my most recent run - it was great, and tickless. The key to starting a run with rolling hills is to go into them easy. It's not really realistic to expect to feel great going into a hilly run at a "flat" pace. Eventually, after you warm up, which might take 15 minutes, your pace will naturally start picking up.

Here are a few tips for running hills outside: 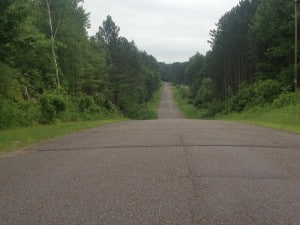 The best stretch of road EVER!

We left my parents' house on Sunday, but my kids stayed. I have never left my kids for that long, so I was a little sad, shed a few tears and felt a little nervous. After we were in the car for a while, I started thinking about all the things I could do without being on their schedule. Justin works in fitness as well, so we both wanted to try a few different workouts. Wow. After writing that out, it looks a little geeky, but I'm leaving it! I can line up 20 other parents who could think of a million other things to do other than "try a few different workouts."

Justin hasn't taken a yoga class in over 10 years, so I wanted to get him into a class. There is a CorePower Yoga down the street from us, so we went for it. The class we ended up taking was a Yoga Sculpt class, which was great, but not the true yoga he was expecting. The class was pretty full, and guess what...he was the only guy. Justin bravely grabbed his set of five pound weights, walked over to his mat through the 95 degree air and found his resting position. If you've never taken a Yoga Sculpt class from CorePower, think of it as a vinyasa flow-ish class set to music with light hand weights. Several of exercises done have absolutely nothing to do with yoga whatsoever, so if you're a purist, this wouldn't be for you. But if you're open to a new workout, go for it. Justin was tucked up against a far wall with no mirrors in front of him, which for yoga, is the worst place to be if you're not used to going through a vinyasa. You basically have to really look around to see what the hell is going on. The flow of the class was fast. We did at least 25 chaturangas (or a slow push up in the downward position), followed by a million chair poses (or so it felt), and finished with mountain climbers. What? Yes, mountain climbers...as you do in a yoga class...from CorePower Yoga...called Yoga Sculpt.

I went for a short run earlier in the day, so I was a weeeee bit fatigued and drenched in sweat. Afterward, we went home, changed, then went to watch the Blackhawks win the Stanley Cup. Not a bad night!

Back to Core Power
That was yesterday. At Justin's request, we went back to CorePower Yoga to try to find a regular yoga class. He looked over the schedule, and we were out the door for an early evening class. I'm not sure where the miscommunication was, but after we arrived and got situated, I heard the instructor say, "thanks for coming to Yoga Sculpt." Yup. Same class format, different instructor. This time there were six men! The workout was challenging, fun and definitely focused on core. Again, we left drenched in sweat. Keep in mind, everyone leaves drenched in sweat because the temperature is so hot, but the exercises were good, too.

Off to Flywheel
It's been a long, long time since I've done back-to-back workouts. Kidless day 1 had a run and Yoga Sculpt built in. Kidless day 2 had Yoga Sculpt and an hour at Flywheel built in. The whole point of the workouts is just to try something new, and Flywheel was just that. If you like spinning, you'll probably like Flywheel. Neither Justin or I had taken a Flywheel class before, so we both got out first class free. Bonus! While we had our own shoes, they're provided complimentary for people who don't have them. Flywheel is different from a spinning class as weights are integrated in with the workout. Two and four pound weights are used for arm strengthening exercises. Riders can opt into the Torque Board, a computer screen that monitors the output of the bikes. You can see how much power you're cranking out and where you rank in relation to the rest of the class. Our class was an hour from 7:30 to 8:30pm. I really liked our instructor, Alicia. She played great music, which for me, made the class.

The real question is, what will we do today? We had insane rain here in Chicago this morning, so I used that as an excuse to stay inside and learn some Spanish for our upcoming trip to Costa Rica...instead of working out.

If you could do a workout you've never done before, but always wanted to do, what would it be?

How can I help you reach your ideal weight, create a juicing plan or get you fit? Check out my weight loss and fitness coaching services and let me know.