Avoid These Bad Habits That Can Cause (or lead to) Obesity 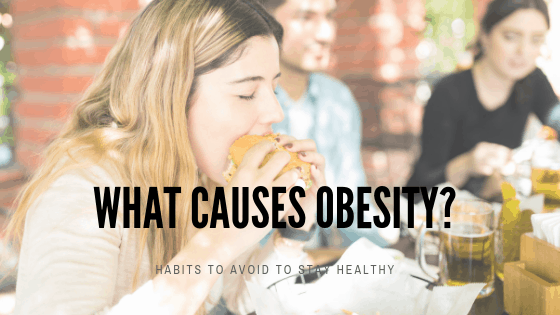 For the next few minutes, or just as you glance over this article, take genetics and obesity out of the equation. Let's say that weight gain or weight loss was 100% in your control. Realistically genetics do play a role for some, but not all. According to the National Institute of Diabetes and Kidney Diseases, more than 2 in 3 adults are either overweight or obese. That's a whole lotta people!

The fact that we eat too much is not Earth-shattering. I think you probably know this already. But why are we eating too much? Whether your list is long or short, these are two of the biggest reasons we pack on the pounds.

If you're struggling with extra body weight, know this: you can absolutely lose a lot of the excess and get to a more optimal weight without dieting. You just need to do the work and look at the personal reasons your gaining.

Do either of these reasons to eat sound familiar to you?

Rewarding Yourself With Food

It's ok to have a cheat meal every now and then, but digging into a big brownie or pint of Ben & Jerry's...or both... because you had a good few days of working out is not only unhealthy but counterproductive as well...at least if your goal is weight loss. I'll use myself as a case in point. Last week I had a chain of days that amounted to several great workouts. A couple of the workouts were challenging, but not as intense as I normally go. I don't like to measure anything by calories, but my heart rate monitor has a feature that measures them. After 45 minutes of moderate exercise, I burned right around 320 calories. Again, calories aren't the point, but I think many of us have a misconception that we can eat significantly more after exercise than we really should.

Eating as a reward for working out has the potential to force the scale to move in the opposite direction, adding on pounds. I'm not saying you shouldn't eat after a workout. Many times we should, especially if it's close to mealtime, or if we've worked out particularly hard or long. I'm just saying you shouldn't assume that reward foods won't have a negative effect on your weight loss goals.

I should also mention "pity food," which is exactly the same as reward food, except you're eating the brownie and pint of Ben & Jerry's because you're emotional. You had a bad day, you're stressed, you had a fight, etc., etc., etc. Put the bag of chips down and walk away from the kitchen. You'll only feel worse after you eat all that crap. I know it's not the same, but grab an apple, slice of cheese, or even a piece of dark chocolate. But don't overeat pity food.

Portion Sizes Are Bigger Than You Think!

An extra spoonful of pasta here, a little more gravy there, and the bigger piece of chicken. It's safe to say that each and every one of us has eaten more than we should. Some of us more often than others. But unless your diet consists of leafy greens, you should probably pay attention to portion size. You don't need to measure food at every meal, but after you know how your plate or cereal bowl should look with an appropriate amount of food on it, stick with the plan and don't add any more on.

Let's say that a serving of starchy carbohydrates (bread, pasta, rice, potatoes, cereals, beans, etc) is around 120 calories. Once again, calories aren't the focus, rather portion size, but it helps give perspective. With the exception of bread, most of these portions are around a half-cup (about the size of a tennis ball). Now let's say that you added an extra half cup to your plate or bowl...and you did it each and every day. That's a lot of extra weight. If you did this each and every day without changing anything else in your diet or activity, you could gain one pound. One pound doesn't sound like a lot, but keep it up over several months, or keep eating more at every meal and you've got a problem. It adds up fast.

As I said, there is a laundry list of reasons we gain or lose weight, but if you get your arms around why you're eating and how much you're eating the scale should move!

Interested in private weight loss coaching? Connect with me for a free 15-minute consultation.