This Veteran Broke His Neck, then Re-enlisted 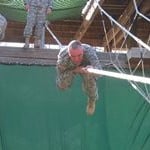 If there were a real-life Ironman, it would be Neil Gussman.  At first, Gussman's life sounds "simple" enough. He joined the army in 1976 when he was 18. At that time, the Vietnam war was just ending, and Gussman was stationed in Germany as a tank commander. After the army, Gussman went to school at Penn State, got a job, got married and had children. Somewhere along the road, Gussman started smoking. At the age of 37, he decided to quit. In exchange for smoking , he took to cycling. This is when he starts putting us mere mortals to shame.

Living in Pennsylvania, Gussman cycled regularly from 1994 to 2003. It was then that Gussman decided to "get serious" and start racing. In fact, between 2003 and 2007, Gussman participated in dozens of races every year and consistently rode 10,000 miles annually. The Philadelphia area is prime for year-round cycling, with organized rides nearly every day of the year, Gussman passion for cycling was unrelenting. Then one day in May of 2007, Gussman and a group of 12 other riders went out for what would have been considered a typical ride, which included a 35-mile loop culminating with a coasting race down notoriously steep Turkey Hill. Cyclists race to the bottom of the hill in a close-knit draft pack without pedaling. The first person to that reaches the bottom wins.

The descent down Turkey Hill was something Gussman had done many, many times in the past. As the riders began to roll down the hill, Gussman set himself up at the back of the pack, hoping to gain a greater advantage drafting off his fellow cyclists. His plan was working. He quickly blew down the hill, passing every bike except one. In drafting races, it's not uncommon to come within mere inches to the wheel of the bike in front of you. Gussman was there - nearly at the bottom of the hill, flying at full speed when something horrific happened. Gussman's wheel made contact with the bike in front of him. Catapulted from his bike at 50 miles an hour, Gussman had nothing but scant recollections of being strapped down, feeling agitated and a sense of moving upward after the crash.

Gussman was MEDEVACed from the bottom of Turkey Hill to the hospital 17 miles away. His neck suffered the greatest injuries with a smashed seventh vertebrae, and severe damage to his first and second vertebra. Emergency surgery was quickly performed to replace his smashed vertebrae, and to reattach skin from his forehead that had been partly peeled away in the crash. Other injuries included four broken ribs as well as a broken collar bone and shoulder blade.

Most people would assume that a crash resulting in injuries of this magnitude would equate to weeks in the hospital. Seven days after being admitted to the hospital, Gussman left. His doctor told him he could leave when he could walk. Fortunately, all of the injuries to Gussman's body were from the ribs up. With the support of a neck brace and a will of steel, Gussman's only goal was to recover and get back on the bike.

He's the hook. Just before his accident, at the age of 54, Gussman passed a rigorous military aptitude test that would give him the green light to re-enlist in the army national guard later that summer. Back in 2006, the government raised the enlistment age by seven years. Gussman still didn't make the cut, but he was close enough that a letter of permission from a general would allow him to serve.

Still not officially re-enlisted, Gussman knew he had to recover, yielding to his doctor's advice and building back his strength one day at a time. Breaking his neck was nothing less than a motivation to accomplish the goal he set out to do long before the crash.

His first weeks out of the hospital, Gussman walked everyday anywhere between three and seven miles. Within a month of the crash, Gussman was back on a stationary bike. The day he was well enough to ride his bike, he went for a five mile ride with his daughter. The following day, nearly three months after the crash, Gussman went down Turkey Hill. Two weeks later, on August 16, 2007, Gussman officially re-enlisted in the army. Just over 30 years from the first time he enlisted on 1976.

In January of 2009, the day Gussman turned 56, he deployed for a one year tour in Iraq.

Today, Gussman is still an active masters cyclist, but instead of riding upwards of 10,000 miles a year, he rides anywhere between 6-7,000.  His scaled -back riding schedule hasn't affected his fitness. Every six month, the army requires a fitness test. Gussman's scores have steadily gone up. His most recent fitness test scored the maximum.

Now, Gussman isn't crazy, and as unreal as it sounds, he's not insanely compulsive. He's simply driven. His accident changed him from a self-described "monomaniac" to a more balanced person. Still a reservist, and closing in on 60, Gussman knows the army will most likely "kick him out" soon enough. Gussman, who resides in Lancaster, has three college-age daughters and two sons. He and his wife are currently in the process of adopting a sixth.

There's something to be said for the strength of the human spirit, an attitude that sees solutions in a path of obstacles, and mindset that settles for nothing less than triumph in the wake of tragedy. Gussman embraces these qualities and much more.