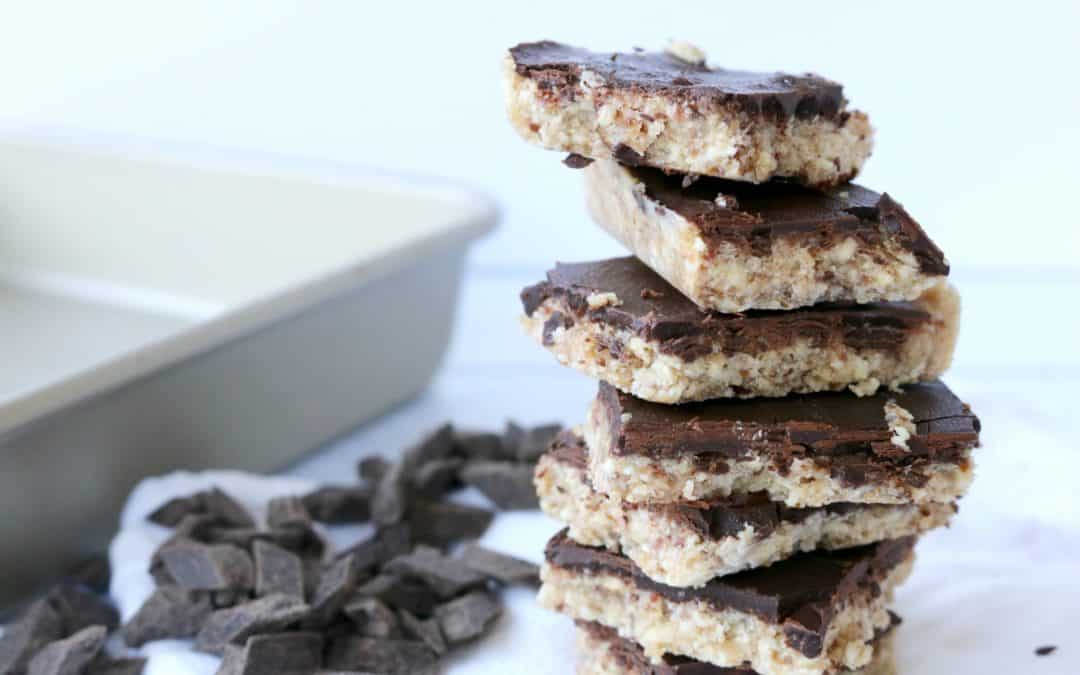 If you've had a chance to snoop around my website much, you'll probably see that I like to make a lot of recipes with chocolate. I mean, who doesn't? I'm also kind of crazy about making desserts as healthy as possible. Needless to say, desserts will have some amount of sugar in them - even if they're purely fruit-based, so it's important to find a good balance. These No Bake Paleo Chocolate Cashew Coconut Bars are the perfect desserts for any sweet tooth that is equally committed to eating healthy.

My greatest struggle in creating delicious and healthy desserts revolves entirely around my children. Most of the time, one or two of my kids like a recipe, but not all three. My two older daughters are finally developing a palette for recipes with less conventional ingredients. My little guy, as cute as he is, remains the toughest critic. He holds no punches and plainly says, "I just can't stand it." He's three, so just about anything he says is immediately forgiven, but I'm sure his choice of words stems from phrases he hears from his two older sisters.

As a matter of practice, I've used coconut oil for baking for as long as I've had kids. They really know no different. When I have guests of family over, they pick up the flavor...sometimes...but not always. If you're on the fence about using coconut oil in a recipe, especially a baked good, just go for it. Use it the same way you would butter, or any other saturated fat. You won't regret it. I use coconut oil liberally, several times a day. It's just an easy, versatile oil to use with a high smoke point. A high smoke point means that the oil won't a) burn and b) oxidize as easily as an oil with a lower smoke point, like corn, canola or soybean oil.

All in all this recipe calls for four (4) ingredients:

Cashews: I use raw cashews for this recipe. I didn't want anything roasted or salty affecting the flavor.

Dates: My go-to date are Medjools. Why? Because they're easy to find and a little goes a looooong way. In total, this recipe calls for 8 dates. Keep dates on hand in your pantry. They're last a long time in a sealed container, and make a great sugar substitute for most sweeteners.

Coconut Oil: Super versatile and I can't imagine any other fat getting substituted for this. I guess you could swap palm oil, but that would not taste quite a pleasant.

*Dark Chocolate: I like Theo Chocolate and Alter Eco for this recipe. Either will work! Paleo diets, technically, don't have chocolate in them. I mean, cavemen weren't walking around eating chocolate bars, but most Paleo diets consider "chocolate in moderation" A-ok. Just take it easy on the sugar and everything will be SO much better.

When to Eat These Bars