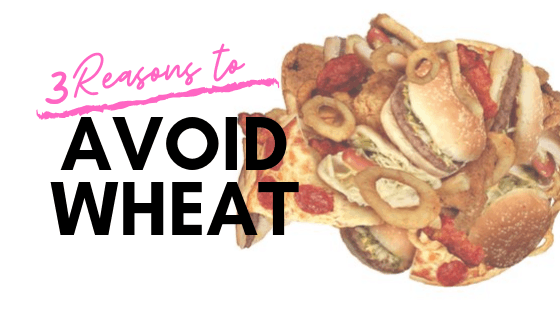 How much wheat do you think you eat in a day? If you're not sure, the answer is probably much more than you realize. Before I get to the reasons why we should all ease off or follow a wheat-free diet, take a minute to think about all the foods wheat is in!

Give your own diet some thought. If you're eating wheat at every meal, you may want to ease off a little bit - but not without good reason for doing so. Wheat, in and of itself, isn't inherently bad for you, but the way we process it today is. Wheats, and other grains including rye, oats and barley, are almost always highly refined and also high in something called phytic acid.
Think of phytic acid as a hard and sticky shell. Inside the shell sits a mineral we all need called phosphorous. Phosphorus helps us with a lot of things, including balancing hormones and forming bones. Unfortunately, the shell is too hard and doesn't break down in our body, so we don't get any of the phosphorous. Because it's sticky (or chelating), it grabs a bunch of other minerals before it actually exits our body, including calcium, zinc and iron. In the end, the more wheat and grain-based products we eat, the more nutrient deficient we become, which affects everything from metabolism to digestion - and everything in between.
Modern-day grains weren't always produced how they are now. We used to soak, or sprout many of the grains we ate. Sprouting grains greatly diminish the amount of phytic acid in the grain, allowing for better absorption of minerals.

Benefits of a Wheat-Free Diet

So what are a few benefits of easing off wheat and grains?

Not everyone needs additional iron. In fact, excessive iron can be dangerous. But if you're taking in foods that are rich in phytic acid, particularly wheat, oats, and you're probably not absorbing as much as you think. Low iron means low energy. No one wants that.

2. Your Bones Will Be Stronger:

Since grains block the absorption of calcium and we don't get much use out of the phosphorous (bone-building) that wheat contains, we run the risk of becoming deficient. Unless you're eating a diet rich in phosphorous-containing foods (see list below, or in Foods That Help You Stress Less), you could really run into trouble over the long run.

3. Your Joints Will Ache Less:

Aches are caused by inflammation. Inflammation can happen anywhere in the body - from your joints to your digestive tract to your heart to your face (acne). It's a really big deal that we need to pay attention to, but I'll save that rant for another day. Wheat contains a compound called lectins. These lectins are there to keep the wheat safe, fighting off bacteria and fungus. Guess what...it does the same thing in our digestive tract, too! Over the decades, wheat has been hybridized so much that our body is no longer able to adapt to the huge amount of lectins. Some people are so sensitive to wheat and other grains now, that they can no longer digest it (celiac disease). Most of us can tolerate a little  with no problem, but when we go gung-ho eating wheat or grain-based products all day, every day - we become inflamed.

What You Can Do to Eat Less Wheat

There are a few foods that people are very sensitive to when it comes to telling them what's good and what's bad to eat. Wheat is one of those foods. I'm not telling you to cut out wheat. But if you've got aches and pains, skin problems, or even digestive issues, why not try cutting out wheat for two weeks and see how you feel?