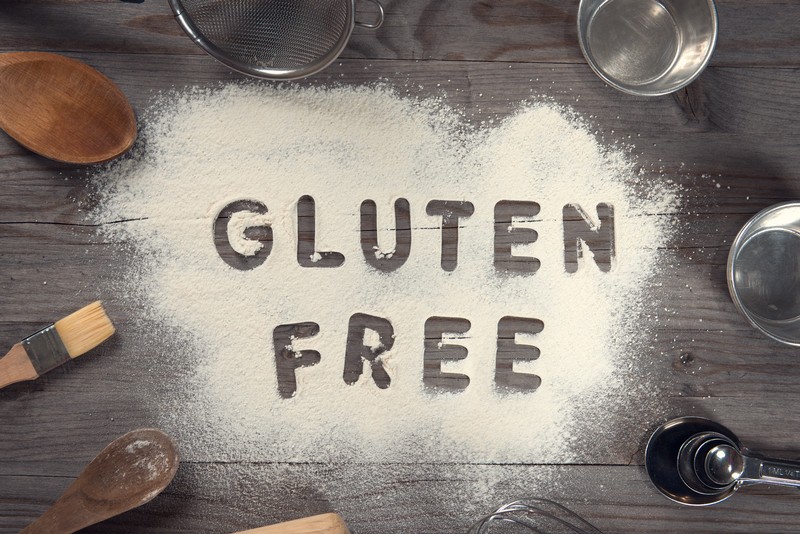 It seems like every other person you bump into is on some sort of a gluten free diet. Nearly everything that once existed with gluten can now be created without it. The thing is, sometimes eating gluten free is no healthier than eating foods with gluten.  This gluten free diet plan and primer on all things gluten (or gluten free) will help you out!

Here's what I hope you take away from this information:

So, what is gluten?

Gluten is simply the combination of two proteins (glutenin and gliadin) found in wheat, barley and rye. That's it! Nothing more. Nothing less.

But that protein gets added into a lot of foods, making it somewhat hard to avoid.

When it comes to baking, gluten is what gives food elasticity and dough strength. You know how bread gets crusty on the outside, but spongy and soft on the inside? That's gluten doing its thing.

Because the byproducts of gluten are in so many things, you could be eating gluten and not even know it. Gluten can be found in processed meats, salad dressings, gravies, soups and candy. If you've recently had soy sauce, licorice or beer, you've consumed gluten.

But who should avoid gluten?

Gluten is also what people with celiac disease can’t digest. In fact, a person with celiac disease needs to steer clear of gluten altogether. About 1 in 133 people have celiac disease. It’s a serious autoimmune condition. Only a blood test can determine whether or not someone has this disease. Weight loss, bone loss, hair loss, iron deficiency and cavities are a few signs, to name a few, of celiac disease.

Many people go undiagnosed. If you suspect you may have celiac disease, see a doctor. The inability to digest food can lead to much greater problems than just a stomach ache.

Many more people, however, deal with gluten sensitivities. Unexplained bloating, joint pain, fatigue, irritable bowel syndrome  and weight gain are a few signs one may be gluten intolerant. Estimates suggest that upwards of 18 million Americans have non-celiac gluten sensitivity.

A good way to know if you’re sensitive to gluten is to completely eliminate it from your diet for a couple weeks. Keep a food journal, noting how you feel, sleep and perhaps what you weigh. Do this everyday. After two weeks, reintroduce gluten. Start with one meal a day. If you’re sensitive, you’ll know pretty fast.

You'll probably notice bloating, gas or some other tell tale sign of sensitivity. People with either gluten sensitivity or celiac disease can greatly improve their gut health by cutting out gluten.

People who want to reduce inflammation

Gluten can trigger inflammation. This is a big deal. People who deal with chronic inflammation have a super tough time losing weight.

I wrote The Belly Burn Plan to be 100% gluten free. I never really advertised that the book is gluten free, but I wanted it to be as anti-inflammatory as possible. Naturally, people who dealt with decades of obesity were able to better control their weight. And they felt better, too!

Should you eat gluten free food?

This is probably where most confusion lies. Personally, I don’t eat gluten. Neither does anyone in my family. I’ve also never had a client work their way off gluten and regret it. In fact, most people lose weight and almost everyone feels better in pretty short order.

The bottom line is you probably eat A LOT of gluten free foods already.

It's the garbage gluten free products that don't do us any favors. Although, a box of gluten free cookies is really nice to have on hand if you've never been able to enjoy a regular chocolate chip cookie before.

If you have celiac disease, the new gluten free boom in foods is great. It’s a nice convenience, but not necessarily a staple in anyone’s diet.

In the forest of processed gluten free foods, we’ve lost sight of foods that are naturally free of gluten. When I wrote The Belly Burn Plan, I wanted to create a resource for people to eat truly healthy. All of the recipes, including muffins and cookies, are free of both gluten and refined sugar. It came as no surprise that after everyone started following the meal plan (not necessarily dieting), they lost weight.

Fortunately, there are a lot of really great and healthy foods that are naturally gluten free! Here is a short list:

This is just a really short list, but it’s a good start. Remember, gluten is hidden in a lot of things. Meat loaf contains a lot of bread, ice cream often contains glutenous byproducts and seasoned or salted nuts often contain additives that contain gluten. The best way to avoid gluten is to avoid buying processed foods. Just about anything that comes in a box or package and can sit on a shelf for a long period of time (barring staples like rice), are hot spots of gluten.

Here's a quick gluten free meal plan for you to follow. It's nothing fancy, but just what you need if you want to start eating gluten free without buying foods you're unfamiliar with.

Download the gluten free meal plan here, or pin it below.

Need a little more help figuring out what’s right to eat for your body? The Belly Burn Plan has a nutrition plan, not a diet, that’s right for your body type! The book starts with a simple, short cleanse and moves into a combination fitness and meal plan. You can pick it up here.