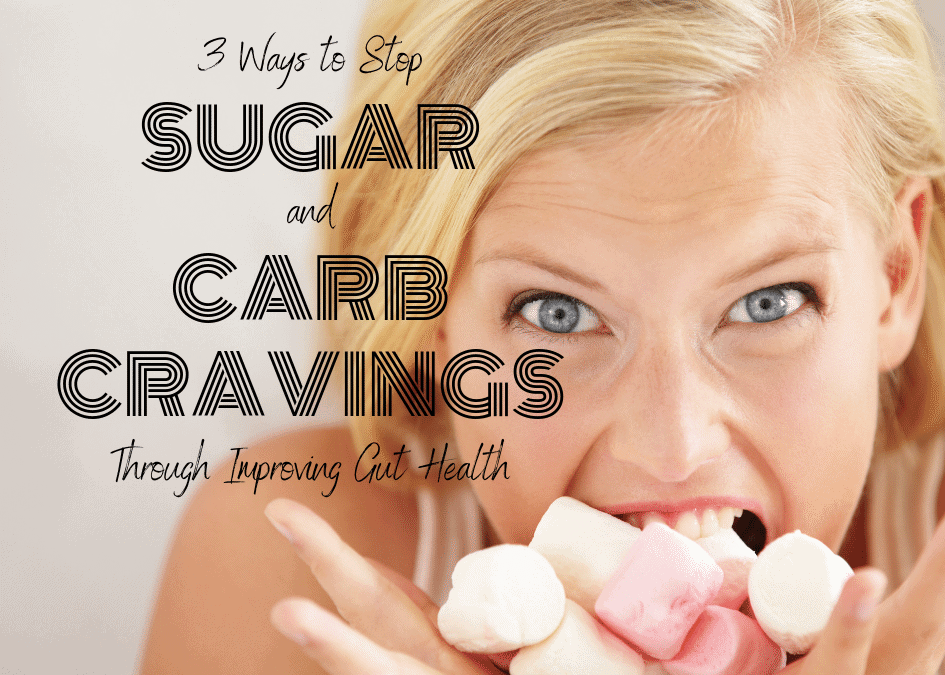 I've gotten a couple questions this week about how to stop sugar and carb cravings. First of all, whether you're reaching for a bag a candy or a loaf of bread - they're essentially the same. Both have a similar effect on your blood sugar levels, and just as important, both have a detrimental effect on your gut's bacteria.

We used to think that bacteria colonized in our gut, meaning it became a permanent resident. I once had this image of bacteria setting up shop and creating a village with countless other types of bacteria. We now know that's not true.

Turns out bacteria (both good and bad) simply vacation in our gut. They have no intention on sticking around, but only harbor a spot in our gut for a couple weeks. This means that both healthy and unhealthy amounts of bacteria can change overtime - all having an impact on our gut health.

Bacteria are in communication with each other, and with other parts of our body. They partially control our cravings, moods and so munch more.

Your sugar and carb cravings are likely being dictated, to some degree, but the bacteria deep inside of you. Here's how that happens.

How Gut Bacteria Controls Cravings for Carbs and Sugar

When it comes to living with bacteria in our gut, it's a lot like life. We need to be in harmony with the good and the bad.   We'll never be 100% free of bad gut bacteria, but we can do our best to increase the load of good bacteria.

As mentioned above, gut bacteria influencer our metabolism, cravings, mood, weight and even our immune system. Bad bacteria, naturally, has a negative impact on these parts of our life, whereas good bacteria have a positive influence. In fact, research has shown that the bacteria in our body help to regulate where how we store fat.

Increasing good gut bacteria helps you curb cravings for carbs and sugar, mostly because bad bacteria feed on foods that convert to sugar, and on a physiological level, communicates to your body that you need more - increasing cravings. Needless to say, increasing gut bacteria also means you'll stay closer to a more optimal weight than if your body was full of bad bacterial

When we have a greater balance of good gut bacteria, we crave fewer refined carbs and sugar. Because we're craving less, we eat less. Since excess carbohydrates and sugar area always stored as fat, your body stress less of it! Make sense?

Do You Have Poor Gut Health?

If you have any of the following problems, you could have too much unhealthy gut bacteria:

There is a lot you can do to get control of your gut bacteria to bring it back to balance. Here are a few tips you can start right now.

As difficult as it might be, you need to minimize refined carbohydrates and sugary foods that increase gut bacteria. This includes:

Yep, high glycemic foods - even fruit - is on the list for now. Even though fruits are technically a good carbohydrate, they should be avoided, along with all the other bad carbohydrates, until you have your gut bacteria under control.

When I was a little girl, my grandmother's basement used to be filled with jars of homemade sauerkraut. I can't say, at 5 or 6, that I was a huge fan of eating food from dusty old-looking jars, but wow...do I appreciate them now!
Fermented foods, including homemade pickles, make a tremendous difference in your body's balance of gut bacteria. I can't stress this enough!
Ideally, we should eat at least a serving of fermented foods everyday. Fermented foods are incredibly easy to make - and require no cooking. Usually all you need are a few sterile glass containers, salt, water and your vegetable of choice.
Homemade yogurt is also another great and very simple way to increase your gut's good bacteria. Unfortunately, commercial brands, even those that don't contain any added sugar, are so pasteurized that they good bacteria they once contained has been all but obliterated.
Be wary of brands that boast bacteria benefits, especially those that are fruit-flavored and loaded with sugar. See point #1...these are exactly the foods you're trying to avoid.
Eating sugary yogurt to try to improve gut health is like blowing out one end of a match stick while starting a flame on the other end. It doesn't work out.

Kimchi, natto and unpasteurized dairy are a few other foods that can provide good bacteria for you gut.

Let's say you love, love, love the idea of making fermented foods, but won't be making them anytime soon. I get it, friend, I get it. Still, think about it. After you make them, you'll think 'That was so easy! I should have made these delicious fermented vegetables years ago!' Or something like that.

Another safe and effective route is to take a high quality probiotic.

There are a million companies that make probiotics. Some are good. Some are not.

Don't waste your money on a brand that hasn't taken the time to research the strain(s) of bacteria they're adding to their product.

Having worked in nutritional consumer goods, I know how easy it is to source bacteria. And it doesn't always have to be researched.

When you're at the store, do a minute of research by turning the bottle around and looking at the strains the probiotic contains.

Here's what I mean:

Too general of a strain of bacteria: Lactobacillus acidophilus

Think of this a the 'style' of a car, like a sedan. It's just a sedan.

I'm not saying that the sedan, or probiotic, in this case, is a lemon, but I'm not going to buy it unless I know more about it.

Going off the analogy above, this is a little more descriptive.

This sedan is a super efficient.

It's tells me everything I need to know - the make and model are all right there. If I wanted to dig deeper, I could, but now I have the confidence that the company did due diligence in their research and transparency. Kudos!

Here's visual of what I look for:

I often try different probiotics. Here are a few brands I trust:

Of course, there are a few other things we can do to help balance our healthy gut bacteria, including eliminating alcohol, managing stress and getting more sleep. If you're suffering with gut issues, you have the power to control a lot! Start by taking these three steps.