5 Nutrition Habits That Have Changed My Life Completely 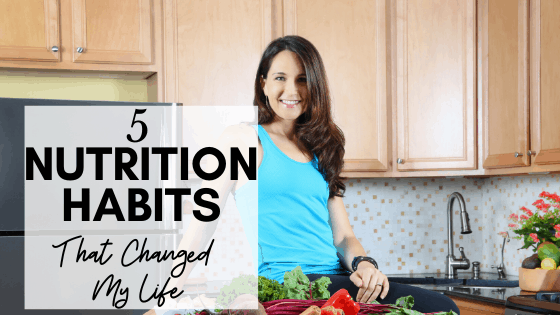 When I was a kid, I ate okay. I wouldn't say my nutrition habits were great, but we had a decent amount of home-cooked meals at home, and I didn't really eat fast food. My father worked for Pepsi, so we always had soda in our house, but I never craved or wanted it. My brother, on the other hand, would drink Mountain Dew every chance he had.

My nutrition habits started going off the rails when I was a teenager. I ate from the school cafeteria in high school - and it got ugly.

I'm fairly sure this is what my lunch was 99% of the time:

Gosh, I have no idea why my skin looked terrible and why I wanted to take a nap by the time 1pm rolled around.

I will admit that it took me more than a decade...actually, closer to 15 years after starting high school to get my act together with my diet.

Nutrition (or lack thereof) and The College Years

First, let me be clear - I didn’t major in nutrition and I didn’t aspire to working in the field either. I was a double major in psychology and broadcast journalism. I loved both fields, but neither area of study set me up for a life of being healthy.

I had to learn the hard way!

So as college eating goes, I enjoyed salads, but slathered them with loads of crappy dressing. I ate ice cream with friends, and breadsticks when I studied.

Soda managed to worm it’s way into my life in the form of a new-found addiction to diet soda I drank it constantly. I also drank coffee, which isn't the worst thing in the world, but I always had to have Sweet-N-Low in it. It was an aspartame nightmare!

And If you’re wondering if I went to parties with my friends every week, the answer is yes. Thursday nights were all the rage, along with games of Three Man, Quarters and Flip Cup.

By this time, I was about 15 pounds overweight, bloated all the time, suffering from the worst case of PCOS and was on the pill to regulate my period. Ugh!

No one ever said to me, "maybe you should change you diet."

At one point in college, I went into my doctor because I had terrible headaches. They were migraines and plagued me everyday at 3:00pm. It turns out, the form of birth control I was on triggered the migraines. So instead of going off the pill, I simply switched to another birth control. Genius!

That said, I distinctly remember my doctor telling me one day, seconds before I walked out of his office, “You know, the youngest stroke patient I’ve ever had was 18 years old.” Little did I know at that time how prophetic his words would be.

Moving forward into my early 20s, I became a chronic dieter, cutting calories with an axe and eating as little fat as possible. My nutrition habits were incredibly terrible. I was finally off the pill, but had no signs of ever getting a regular period.

Then one day I had a stroke. Yup, a stroke.

Keep in mind, despite my terrible dietary habits, I had never had a cigarette in my life, never used drugs, worked out all the time...and counted calories like it was my job. I drank occasionally, but it was never regular and certainly not a problem.

But I still had a stroke.

It was not a major stroke. I was able to take care of myself afterward. Just when I started getting my head around what happened, I was knocked down again.

Only this time, my body took off the gloves and really shut me down.

To make a very long story short, I had a paper cut on my finger that turned into a disease called necrotizing fasciitis, more commonly known as the flesh eating bacteria.

It was as awful as it sounds. I was in the hospital for a long time. I needed three surgeries. I have scars. And it took a really long time for me not to feel sorry for myself. Enough said about that!

The Race to Healthy Eating

Then one day I went to run a 10K in Aurora, Illinois. A little over a year had gone by since I had my surgeries, which resulted in the removal of my lymph nodes from my left underarm, some tissue down my back as well as some bicep muscle from my left arm.

There I stood, standing on the start line, ready to run. I looked around at the anxious runners ready to endure the 6.2 mile race.

It was at that time that I had a Holy Sh!t moment!

Seconds before the race began, I was sandwiched by dozens of other people jockeying for a good place to run. It was a warm June morning and everyone was somewhat sweaty as they had just finished warming up.

I cringed as other people bumped into me, as I’m sure they did the same as my sweaty body knocked into theirs.

Someone started singing the national anthem - a sign the race was about to start. I started getting nervous and just wanted the gun to go off.

I could not believe what I just saw.

You see, around this time, I was still having pity parties for myself after getting sick. I had most of the mobility back in my left arm, but couldn’t quite reach overhead yet. Other than that, I can’t think of one good reason I felt sorry for myself because I was alive.

The Perspective That Changed Everything

So what did I see?

Both the man to my left and the woman to my right were missing their left arm.

Here I was feeling sorry for myself about a series of surgeries that saved my life, not to mention my left arm, and there were these two people - who appeared not to know each other - at the start of a race, ready to run circles around me...with no left arm.

To this day, I’m fairly certain the two people with me at the starting line didn’t know each other. At first, I thought it was too much of a coincidence. They had to know each other, right? I mean, they were both missing a left arm. Maybe they were part of some club for people missing left arms. Or maybe they were married or dating...purely attracted by the fact that they had no left arm.

That wasn’t the case.

I sort of “race stalked” them after I finished - several minutes after each of them, I might add.

They didn’t talk after the race or even walk near each other.

I wrote down their racing bib number (I told you I “race stalked” them). When the race results were available online, I checked their lightening fast times. The only thing that they had in common, other than missing a left arm, was that they ran fast. Really fast.

That race effectively ended any pity party I had for myself, and just about every pity party moving forward.But it also gave me great perspective that I could be a better person, a healthier person, if I focused on nutrition.

The connection might not be as obvious to you, but it made sense to me at the time. And I haven’t looked back since.

Fast forward about 16 years later and here I am. Re-educated in health and nutrition education.

It was about 16 years ago that I made a few changes with my nutrition habits that have improved my life incredibly. Not just a little. A lot.

Here are my nutrition habits that make me feel better today than I did 16 years ago.

I used to have a big problem with sugar. I was addicted. The brief history I outlined gives you a glimpse into how I used to eat. Sugar was always front and center. Because I ate low fat, or tried to avoid fat, sugar was the filler. Nearly every diet food was loaded either with artificial sweeteners, high fructose corn syrup or some other crap form of sugar.

I try to avoid added sugar as much as possible today.

I might have an ice cream or two over the summer, and if my kids want to make Christmas cookies, I will certainly have a couple, but added sugar is not part of my daily routine.

Here are a few solid ways to crush sugar addiction.

2 - I eat a lot of foods that contain fiber

Fiber is so important for our bodies. It helps us lower cholesterol and eliminate toxins. It helps to make us feel fuller and regular blood sugar levels.

In fact, bumping up fiber by just 10 grams a daydecreases visceral belly fat by nearly 4%. That’s quite a bit!

Here is a list of about 70 foods that are high in fiber that can help your body get on a faster fiber track.

3 - I drink water at specific times

Water is a tough thing to get people to commit to. I know it was hard for me to drink when I was younger, but now it’s simply not a chore.

I drink water all the time, but I make sure I drink between 8 to 12 ounces of water at the following times:

The morning makes sense for most people because it’s typically a time when people are thirstier. It’s important to rehydrate at this time, which helps with everything from digestion to skin tone.

Drinking before every meal or snacks is important for digestion. When you drink water (or any liquid) while you’re eating a meal or snack, that liquid is competing with stomach acid. Stomach acid and water don’t mix. The combination can cause bloating or indigestion.

Make things easy for yourself and just drink water around, but not during meal time.

This is a really important point that gets messed up a lot.

Fat is so beneficial, but only if it’s high quality.

Not all fats are created equal. If you’re eating foods that are filled with low quality fats, like soybean, corn or canola oil, you’re opening the door for inflammation and disease. You’re also aging yourself faster than you would if you ate a high quality fat.

As big of a fan I am of fat, I’m not a fan of keto-style diets. Unless they’re medically necessary, there is always a much healthier way to eat.

When I work with clients, I find the thing they revert back to is some form of a diet - especially when they’re trying to manage weight gain.

I definitely dieted when I was younger and can relate to the feeling people need to take control of their weight by controlling food in some way, but that usually backfires.

I say this, and I’m also the author of The Belly Burn Plan - which admittedly sounds like a diet, but it follows the principles of long term healthy eating.

The difference between trendy dieting and healthy eating plans is this:

So there it is. Those are my five rock solid nutrition habits. I know they're not earth shattering. And they shouldn't be. It's kind of boring. But the more we try to tweak things, the more messed up our bodies get.

Of course, there are a lot of things I don't even bother eating because I know they'll trash my body. Those foods include:

A lot of things about our lives are dynamic and forever changing, but some very basic things about our bodies remain the same, including diet and nutrition. There is no need to invent health. It already exists. It's yours to take. Go out and get it.