Inflammatory Foods to Avoid to Keep Your Weight In Check 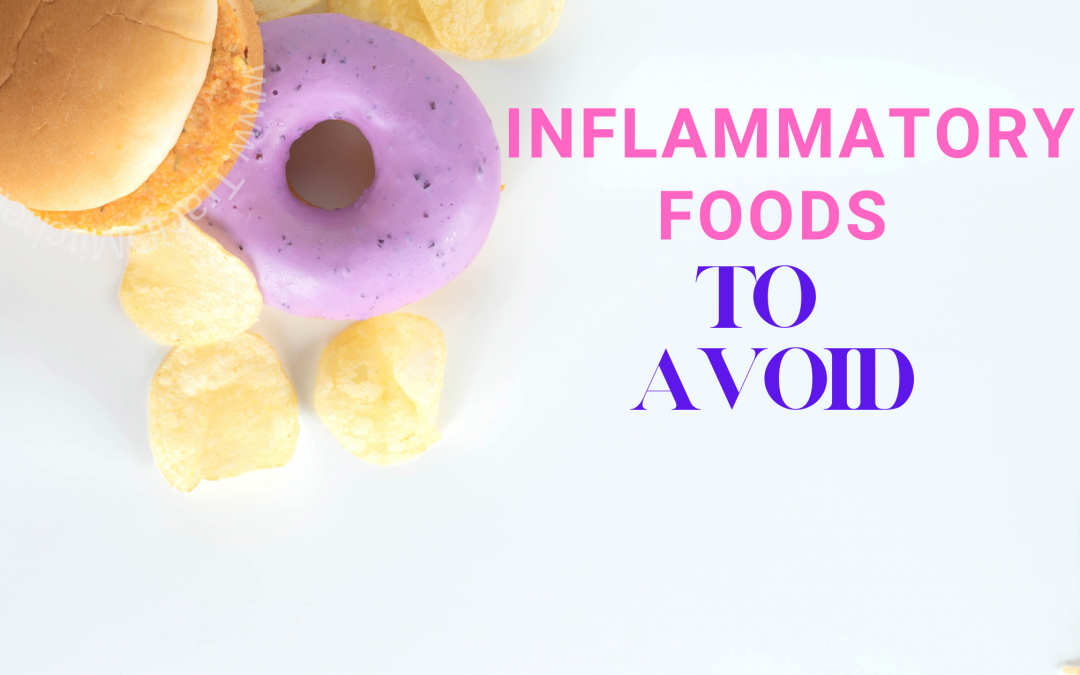 I've written a lot about the connection between inflammation and weight gain. The two generally go hand-in-hand. Given that everything we learn about weight gain has more to do with calories and a lack of exercise, it's harder to make the connection between the inflammatory foods to avoid and how those foods affect on our bodies - especially in terms of creating inflammation. But just because we don't understand something doesn't make it any less real.

The bottom line is too much inflammation is bad. And the foods we eat have a profound impact on inflammation in our body. Longterm inflammation is normally referred to as chronic inflammation. Whether the inflammation you have is triggered by a condition, like arthritis, or a bad habit, like consuming excessive amounts of sodium, weight gain won't be far behind.

The relationship between food and inflammation is cyclical. Food can either act as the catalyst for inflammation or prolong it after an inflammatory condition has already set in. 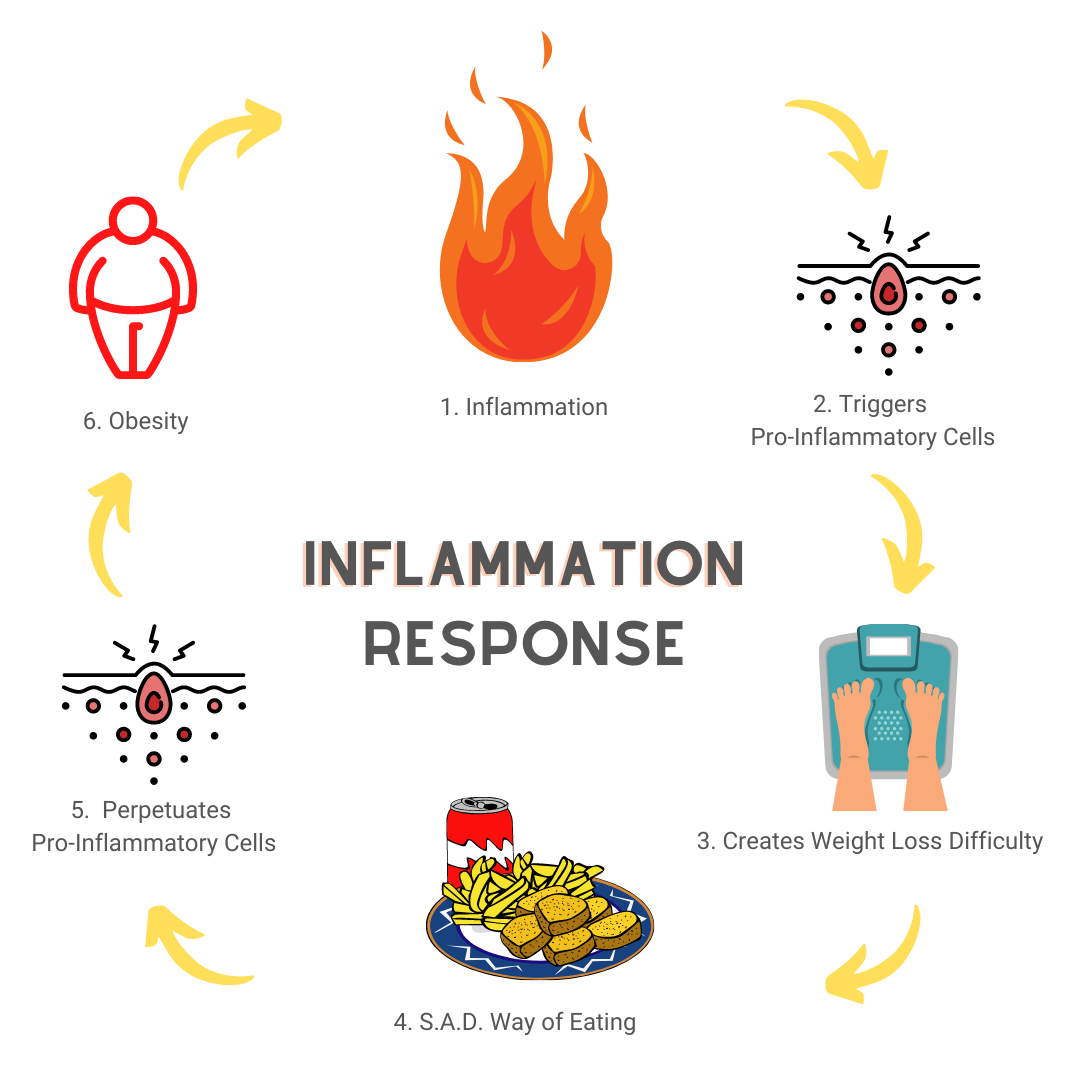 Well known author and health practitioner, Anne Wigmore, once said, “The food you eat can be either the safest and most powerful form of medicine or the slowest form of poison.” These wise words were said decades ago, but still ring true today.

Three "Food Groups" to Get to Know

In the world of food, our choices range from incredibly healthy to outrageously awful. Because incredibly healthy foods are usually natural, not a lot of money goes behind promoting them. Incredibly unhealthy foods, on the other hand, usually have a number of different ingredients, often hard to pronounce, that are made in factories. Some of these foods are "health washed", or marketed to appear healthy, when in fact they're far from it.

An example of a health-washed food is fruit-flavored yogurts. These yogurts have more sugar than eight ounces of soda, and those that don't are sweetened with artificial sweeteners. Neither of which do our bodies any favors and both of which are associated with inflammation.

These are foods that are heavily processed, often filled with sugar, sodium, refined flours, food stabilizers and flavor enhancers, to name a few. Eat these foods minimally. If you can avoid them entirely, even better. This group should make up the least amount of food in your diet and are right on top of the list of inflammatory foods to avoid.

Whole foods are simply foods that are available in their original form. These foods are generally anti-inflammatory, full of fiber and still contain many of the nutrients they were grown with. These foods should make up a majority of what you eat throughout the day.

My diet is entirely plant-based, so I naturally encourage everyone to eat this way. If you're not plant-based, adding modest amounts of eggs, fresh cheese, honey or locally farmed meats may make committing to this way of eating easier.

You may LOVE some, a few or all of these foods. Read through this list, and think about what you can do without or how you can significantly cut back.

By the way, I won't be mentioning deep fried foods, excessively large portions, pints of ice cream or sleeves of cookies. You already know that's not going to be good for you.

Here is my list of the biggest offenders. I'll try to be as specific as possible.​

Whether diet or regular, sodas whack on the inflammation. Regular sodas have a minimum of 9 teaspoons of sugar, usually in the form of high fructose corn syrup that profoundly affects our liver. Diet sodas contain non-nutritive sweeteners, like aspartame, an artificial sweetener linked to insulin resistance.

Instead of soda: Try club soda with a splash of lemon.

Products That Contain This One Ingredient

Enriched Flour. Almost all breads, pastas, wraps or crackers contain some form of flour. Not all flours are inherently bad. Enriched flour, on the other hand, is the least healthy of all. The word "enriched" means that the flour in the product you're buying has been stripped of its nutrient value (i.e. fiber and vitamins). Sometimes these nutrients are pumped in on the backend, but rarely does it make the product healthier.

Instead of Enriched Flour: Look for a bread that does not contain enriched flour. You'll need to read the label to do this. Then look at the nutrition facts and make sure that the product you're buying has at least 2 grams of fiber per serving.

Anything That Contains These Ingredients

Corn, canola or soybean oil. These three oils are highly processed vegetables oils and almost always the go-to oil of choice for processed foods because they're cheap. Just because a food doesn't have a lot of this ingredient doesn't mean it's any better.

This is a hard one to avoid. Try to minimize whenever you can. But, by simply trying to cut this out, you'll make your body so much healthier. Processed vegetable oils are a major contributor to diet-related inflammation.

Instead of Processed Vegetable Oils: Buy foods that contain healthier fats/oils, like avocado oil, olive oil and for some people, coconut oil. Make more foods from home. This means planning. If this is a sticking point for you, think about joining my Winter Coaching Group on January 10th.

I will always have this on my list because it is one of the greatest "health-washed" foods that have ever existed. Fruit-flavored yogurts (including their smoothie counterparts) are a hotbed of added sugars. Eating a fruit-flavored yogurt for breakfast is no healthier than eating a bowl of sugary cereal. This applies to both dairy and non-dairy yogurts.

Instead of fruit-flavored yogurts: Simply buy unsweetened, and add a teaspoon of maple syrup, honey or fresh berries to what you're eating. You'll cut back on sugar significantly!

I'm talking about every single coffee drink that has a pump of syrup in it or a dollop of cream on top of it. If you have one of these coffee (or tea) drinks once every few months, don't worry about it. But if you're stopping in once a week for a sauced-up coffee drinking, you're severely taxing your healthy budget.

Instead of Sugar-Laden Coffee Drinks: Go black! If that doesn't work for you, add a little stevia or creamer. My preference of creamer is always non-dairy. You can always give green tea or herbal teas a try, too. Personally, I really like ginger, camomile and peppermint.

As a quick recap, here is what you should watch out for: