These 5 Habits Stop You From Losing Weight 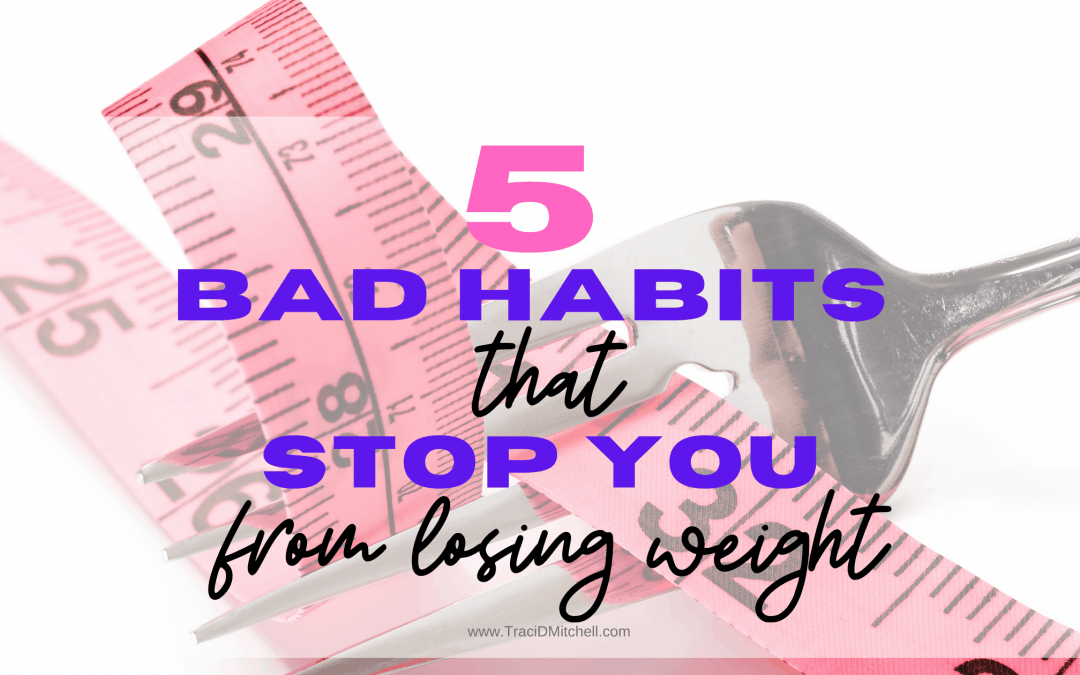 When most people want to lose weight, they have some target number in mind, like 20 pounds. Twenty pounds is certainly a highly achievable number that anyone with 20 extra pounds to spare can certainly lose. But when it comes to modern-day weight loss, there are two problems: 1) eating in a way that allows your body to lose weight, and 2) keeping the weight off for good after you lose it. Habits get in the way. Today I want to highly 5 of the most common habits my clients have to overcome before losing weight permanently.

The Habits That Keep You From Losing Weight

Roughly 2/3 of people who lose weight gain it back within two years. Tack on a few extra pounds in between the next attempt at weight loss, and the road to success is that much further away.

Before I dive into the five habits that are at the heart of stopping people from losing weight, I want to say something loud and clear:

**Everyone is capable of losing weight, permanently, and feeling greater than they did before, including you**

But there are no magic wands when it comes to weight loss. You actually do need to make an effort, and with that effort comes change. Absolutely nothing is more important that your ability to change the handful of habits or patterns that hold you back from moving forward.

In fact, if you have the attitude that you simply won't change, and that somehow eating minimally, or eating a diet that's almost exclusively fat, or overexercising is the only path you'll follow to lose weight, stop reading now. This is probably a waste of your time. But, if you want to do this work and make big, lasting change in your life, then this is the place for you.

Maybe you don't identify with any of the habits below. Maybe only one resonates with you. Regardless, reading through these habits will, at the very least, make you conscious of the possibility that one of them could be affecting or blocking you from losing unhealthy weight. And chances are, if you change the habit that is holding you back, you'll benefit in other (likely much more) important areas of your life, too!

Habit #1: You Give Up Too Easily

This habit goes out to all the people out there who were actually on the right track, but just gave up because they weren't patient enough with their bodies. When you eat the right way to shed unhealthy body weight, the scale should move slowly. For my clients who come to me after a lifetime of dieting, this is a hard pill to swallow. Losing between 1/2 pound, up to 2 pounds a week (max) is what you should expect for long, sustainable weight loss.

The problem is, some people throw the towel in when they only see 2 pounds come off over two weeks. I get it! If you want to lose 50 pounds, dropping a measly two pounds doesn't seem like much, does it? There has to be a faster way, right?

The reality is that two pounds less than where you started toward your goal is progress. As long as you're seeing progress on a downward trajectory, you're doing great. And chances are, if you're losing weight slowly (versus quickly), it's sustainable.

Extrapolate. Let's say you lose two pounds every two weeks, or one pound a week. That's 52 pounds a year! Even if you cut that in half, it's still a lot of unneeded weight. In the world of healthy weight loss, between the tortoise and hare, the tortoise always wins. Always.

Here's a challenge: for anyone who thinks losing a two pounds of weight isn't a lot, grab something that weighs two pounds and hold onto it all day. You'll feel it. Losing two pounds of unneeded body fat is pressure your body no longer has to manage, which is a great thing!

Habit #2: You Diet Cycled For A Long Time

If you've followed me long enough, you know that I study the hormonal side of weight loss. Often times, when we think about hormones and weight loss, we think of estrogen, or cortisol or insulin. We actually have dozens of hormones chattering to one another throughout our body telling is to do a lot of different things. One such hormone is your thyroid stimulating hormone, or your body's metabolic thermostat.

When you diet frequently by cutting calories too low or by dramatically cutting out macronutrients (protein, carbs and fat), you're sending your body signals. Your body has to take those signals, interpret them and make due with the information sent. Your body will lower and raise its thermostat, part of which controls the rate at which you metabolize food. If you diet for too long, or yo-yo up and down for a prolonged period, your body may just naturally lower its thermostat, slowing metabolism.

When people begin eating healthy after years or sometimes decades of diet cycling, the weight doesn't always disappear. In fact, the scale may nudge up a couple of pounds or just hold steady for a while. It can take months for your thermostat to regulate. Whether you've diet cycled or not, sticking to the path of eating healthy will pay off. Even if you don't see the scale move in the first month, stay with it and listen to your body's signals. If you're not experiencing unusual hunger, fatigue and have plenty of energy...you're doing something right.

Habit #3: The Bumps in the Road Throw You Off

Our body loves good, healthy food. It responds well when we don't eat crap. A lot of people who discover this get into this groove of eating healthy for a long, long time with plenty of motivation and momentum pushing them along. It's incredibly validating to see the inches melt away after putting in the hard work.

But life gets in the way. Significant and insignificant events can throw a wrench into the motivation we once had.

For example: Jenny worked hard to lose 20 pounds for a destination wedding seven months down the road. She did it slow and steady, and for the most part, made healthier habits a part of her life. Then the wedding came along, followed by a week of blissful vacation. Jenny indulged a lot. She got back home a week later and saw the scale was three pounds greater. Really, not bad, but Jenny was unable to shake some of the indulgences she allowed herself on vacation. She started eating desserts after dinner and ate larger portion sizes with meals. Her work schedule fell behind, so she needed to spend more hours in the office, skipping any semblance of exercise her body needed.

Within a month, Jenny was six pounds more. Again, not a big deal, but because Jenny was unable to stop, refocus and re-prioritize, all the weight she lost came back on within three months.

Sometimes the bumps in the road can be much more significant. For my clients, it's often been the case of excessive work stress, family illnesses, and recently, COVID. The important thing to do is take action, and not wait for a longterm situation to fade away. The longer you wait, the longer the road back.

Habit #4: You're Not Totally Honest With Yourself

What we see in our mind's eye isn't always our reality. When you talk to yourself, be honest. Accountability is so important to a healthy lifestyle, and the person you need to be most accountable to is yourself. When you reflect back on what it could be that's triggering your body to gain weight, tell the truth. Sure, you probably did eat a big bowl of roasted broccoli last night, but you also had three cocktails, a basket of fries and two sodas earlier in the day.

One of the simplest ways to get honest with yourself is to temporarily write down everything down. Journal your food in a notebook, on your phone or through an app. You don't need to do it for a long time, but consistently keeping track of everything you eat or drink can be a eye opener and reality check.

Yes, the oatmeal was good for breakfast. But after the oatmeal you had two donut holes that were leftover in the kitchen. You also put two teaspoons of sugar in your coffee (or worse yet, aspartame). Do you see where I'm going? It's not the good stuff that's dragging you down, it's the unneeded food you layered on top needed food that's holding you back.

It's liberating to be honest with yourself. You can start taking more control of parts of your life that were running a little bit too free. After you have control of the foods you're eating, you can be more organized with planning what it is you should eat, and what it is you need to stay away from.

I remember a compelling "diet" conversation I had with a client over 15 years. Her name was Rosemary and she wanted to lose some weight. She was a stay at home mom with three young children at home all under the age of five. She had a lot going on! Rosemary was informed, bright and motivated, but she wanted the quickest path to weight loss...which in her mind was simply eating less.

I asked her, "Rosemary, if you had the choice between two pieces of bread - one a highly nutritious piece, full of fiber and 200 calories, or one with zero calories and very little nutrition, which would you pick?"

She responded, "The zero calorie bread."

The reason I emphasize this is she knew it wasn't good for her, but because so much of the noise she heard throughout her life (as well as my life, and your life, too) told her that fewer calories were better, she wasn't willing to make the leap of faith, at least at that moment, to eat real foods that could support her health, and help her lose unhealthy weight.

If you find yourself constantly gravitating to foods that have fewer calories, but more non-nutritive ingredients, you could still be entrenched in a diet mentality. Diet sodas, sugar-free yogurts, low calorie frozen meals, or eating foods that have fall under a certain amount of points keep us tied to this mentality.

Scales are also a part of the problem. Using a scale as a guideline, or barometer of progress is one thing, but jumping on the scale every single day is not healthy. I realize there are some very popular programs that insist their followers weigh in every day, but that doesn't take into account the natural fluctuations that can happen on a day-to-day basis.

What Are Your Habits?

Everyone is different. Your habits might be none of these, or they could be all of them. If you know you're enabling an unhealthy habit, the best way to overcome it is by introducing a new healthier behavior.

If you want to start eating healthier today, get one of my meal plans, or if you want more personal accountability, connect with me personally.