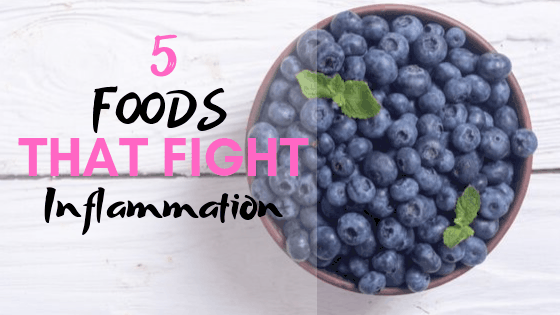 Some time back I came across the most unstoppable study of over 3100 foods procured from around the world alongside their overall antioxidant levels. After taking quite a bit of time reviewing the study, I pulled out the best 5 foods that fight inflammation...with one big qualifier - it has to be an everyday food.

What I mean by an "everyday food" is it's something you can find in your grocery store or farmer's market without asking A) how to pronounce it? or B) where is it?.

These foods are obvious, but still hidden in the shadows of the thousands of other foods you're told you should eat that actually don't stack up to even close to the benefits of these gems. Are there more than five foods that help fight inflammation? Absolutely! But you may be surprised at how quickly the antioxidant level diminishes from food to food - even the foods that we think are the best for us.

Here's the thing...you can order a bunch of super expensive antioxidant supplements and hope they get absorbed, or you could eat them at a much lower cost and increase the probability of them actually doing something good for you!

Full disclosure: I still use supplements, specifically these supplements. I love them. But I don't take supplements when there are foods that could give me an even greater benefit.

You may be wondering in what way foods that fight inflammation is in any way related to antioxidant foods.

The easiest analogy is to imagine inflammation as a fire gone out of control. Antioxidants are water that help put out the flames. The more antioxidants you eat, the easier it is to keep the fire out.

Inflammation can be broke apart into two groups: Acute and Chronic.

Acute inflammation is really important to the health of our body. Let's say you get a paper cut opening an envelope. Ouch! There might be a little bit of blood followed by a little bit of redness. After you wash and cover the cut, you'll feel a sting. The redness and the sting are signs that acute inflammation is helping to heal this wound. Within a day or two, your paper cut will be okay and barely noticeable. Without this important inflammatory response, your body would never get better - and that simple paper cut could turn into something much worse.

Bottom line: acute inflammation is necessary and can be very helpful.

Chronic inflammation is utterly harms the health of our body. In fact, chronic inflammation might go unnoticed or thought of as just something you have to deal with because you're getting older, or because "these are things that just happen in life". While age may contribute to chronic inflammation to some extent, it's not a rite of passage, and it doesn't have to happen. At the very least, it can be controlled.

How Do Antioxidants Work?

On a very basic level, antioxidants work to protect our cells from free radical damage. Free radicals are just molecules in our body with unattached, or single electrons. This doesn't sound like a big deal, but these free radicals have a devastating effect on our body. They're tied to heart disease, cancer and other forms of chronic inflammation.

Antioxidants work to protect our cells. The molecules in our body like to have two attached electrons. When these pairs of electrons separate into single electrons, that's when the trouble starts and free radicals become, well, free. Antioxidants step in by "donating" an electron to molecules with single electrons making them a pair again.

In a nutshell, we should eat foods with the most antioxidants all the time. After all, it takes a hell of a lot of antioxidants to protect our cells. A handful of broccoli once a week just won't do it.

One last thing before we get to the foods you should be eating...

It is impossible to completely avoid free radical damage. Even the healthiest among us will have some level of free radical cellular damage, even if we eat foods that fight inflammation all day long.

Free radical damage happens when we:

The list could go on and on. The best prescription-free thing you do is to try to eat healthier by eating foods that fight inflammation, especially these five:

You probably already guessed that blueberries would be on the list! This is one of those foods that stands up to all the hype. Greater than nearly any other berry, including raspberries, strawberries and blackberries, blueberries are the king of antioxidants. A lot of research has been done on blueberries and their protective effects on Alzheimer's.

If blueberries aren't in season, don't worry about it! The antioxidant level seems to stay the same whether the berries are frozen or fresh. A mere 2/3 of a cup of blueberries provides around 450 mg of antioxidant phytonutrients.

Just because other berries don't rank quite as high as blueberries doesn't mean you shouldn't eat them. Raspberries, blackberries and strawberries all provide some antioxidant nutrition, too.

Add these berries to your favorite dessert, in a smoothie, on oatmeal, as a snack or in these blueberry pancakes.

Peppermint leaves - dried or fresh - are one of those gems that don't get nearly as much attention in the nutrition world as they should. Often used to soothe a stomach ache, peppermint makes its way onto the top five foods that fight inflammation, largely for its antibacterial properties.

Peppermint has a couple of important volatile oils that seem to help reduce inflammation through the respiratory system, making this food a go-to for the common cold, with symptoms like a stuffy nose or mild cough.

Another great benefit of peppermint is its effects on people living with rheumatoid arthritis support network, people with the disease significantly improve the pain levels in their joints by incorporating it into their diet.

You can get the benefits of peppermint through the fresh leaves, dried leaves (such as in tea) as well as through the essential oil (used topically or ingested).

If you're looking for a healthy dessert with peppermint in it, try my dark chocolate mint fudge.

Chocolate ranks as one of the foods that help to fight inflammation for a number of reasons. First, it's important to note that the study referenced about ranked chocolate as a top contender when it had 70% of more cocoa. That means when you go to the store, but a chocolate that is at least 70%. It will be clearly marked on the package.

One of the greatest benefits of dark chocolate consumption is its impact on cardiovascular health. Research has indicated the eating dark chocolate specifically improved heart health and stroke risk.

It's also worth noting that regular, moderate consumption of dark chocolate (a few good squares a day) will help boost your magnesium and iron levels.

If you're looking for a great way to get chocolate that's not in a grocery store bar, then make these 100% yummy dark chocolate almond butter bars.

While all nuts are healthy, walnuts have by far and away the highest antioxidant properties than the rest. Walnuts contain alpha-linoic acid (ALA), an omega 3 fatty acid that can help you lower your risk of heart disease.

A couple other incredible benefits of walnuts include improving gut health, decreasing the risk of some forms of cancer and reducing the risk of type 2 diabetes. Walnuts have also been shown to reduce something called C-reactive protein (CRP). If you have chronic inflammation and have been to the doctor for a related condition, CRP may ring a bell. It's a marker in your blood that practitioners measure to see just how inflammatory you really are. Generally speaking, a lower CRPs is better.

A majority of the inflammation fighting properties of the walnut are found in the skin - the golden/brownish layer you see as soon as you crack open the nut - so don't try to peel if off.

If you want to add walnuts into your diet, it's easy. Simply eat as a snack, add to salads, toss into smoothies or bake into this delicious paleo banana bread.

Believe it or not, red wine came through higher than green tea in the studied I referenced. Red wine always ranks pretty high on the list of foods that fight inflammation, with much of the benefit attributed to the antioxidant resveratrol. Resveratrol may help prevent heart disease and heart attacks in healthy people.

Resveratrol also plays a role in inflammation in general, helping people with conditions such as arthritis.

Of course, no one should start drinking wine for their health. Resveratrol can be found, albeit in lesser amounts, in grapes, berries and some nuts.

You can read up on healthier fats for your body right here.

So there you have it. Those are the top five greatest, most accessible foods that help fight inflammation.

Naturally, with over 3100 foods on the list, I could have dug a little deeper. Keep in mind, most of the foods that are worth eating for their inflammation fighting properties are plant-based. Foods like meats, poultry and fish didn't rank quite as high.

Here are a few more foods that were close to making the list: 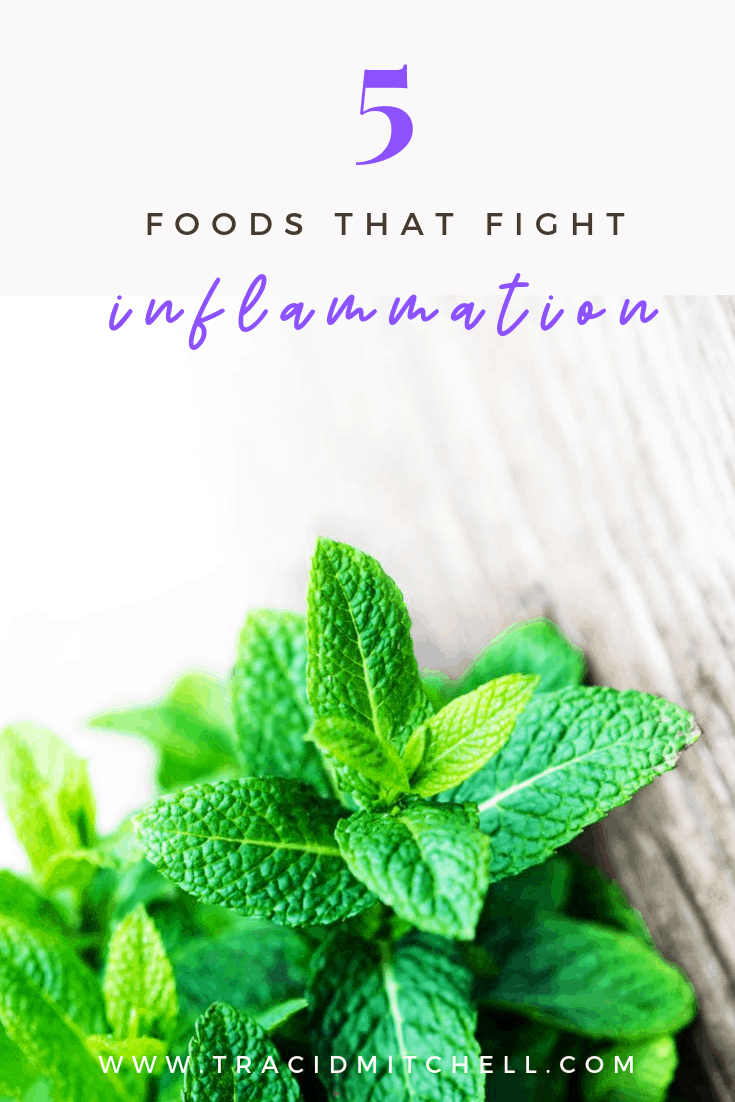