What is Creeping Obesity and How Can You Avoid It? 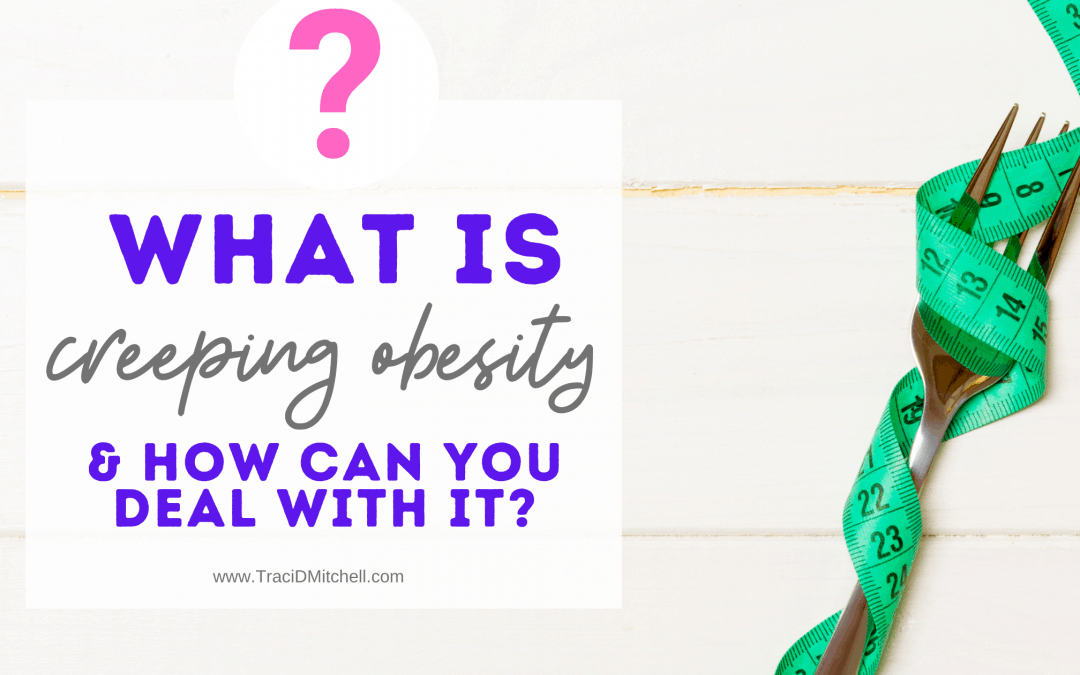 A few extra pounds is not cause for major concern. If you go away on vacation and come back to see the scale two or three pounds heavier, it's really not a big deal and happens to the best of us. The same applies to holidays and other occasions that take you out of your normal routine. After you're back in your normal routine again, the scale comes back down and everything is back to normal. But life isn't always a series of brief occasions. And not everything falls back into a routine. Sometimes career changes, longterm stressful events, or even happy life changes, including marriage, completely change routines, opening the door for dietary and activity changes, too. Very often this results in something called creeping obesity.

What is Creeping Obesity?

For example, Sarah weighed a relatively healthy 145 pounds when she was 35 years old. Today she is 45 and weighs 170 pounds - gaining a mere 2.5 pounds a year. It doesn't seem like that much when you look at it annually, does it?  But the 25 pounds she gained over the past 10 years is considered a creeping type of obesity. Unless Sarah makes changes, it's unlikely her weight will plateau off; she'll likely see the scale continue to increase for the next several years. It wouldn't be shocking in the least if Sarah weighed over 190 pounds by her mid-50s.

It's true that there were probably more variables than just diet that could have affected Sarah. Perhaps she had children, or began experiences hormonal shifts associated with peri-menopause. Maybe she wasn't as active as she once was. Her work responsibilities could have increased, too, keeping her tied to a desk for hours of the day. All of these things could have affected her body's metabolism, contributing to weight gain.

Needless to say, the changes Sarah makes have to involve more than just the foods she eats and the way she moves...although diet and exercise are two of the biggest pieces of the puzzle.

How Can You Manage Creeping Obesity?

What took years to put on may take some time to get off. Although, when you start eating the right foods for your body, expect great things. If you're someone who is dealing with this slow, steady weight gain, making change in your life doesn't mean you need to overhaul everything, but it does mean a few things need adjusting. Eventually the weight will come off.

As far as I'm concerned, it's a success when my clients maintain a consistent weight loss of 1/2 pound a week. It might only be a couple pounds a month, but it's moving in the right direction, and it's much more likely that the changes made losing 1/2 pound a week will be longterm vs a more aggressive weight loss that's likely to rebound. Extrapolate that over a year or two and you're looking at serious weight or fat loss.

Write down the 3 biggest changes you think you need to make to get your body back on track, and then make them. Here are a few prompts that might help you:

Anything you answered "no" to is a place you can tackle to start making change. Start with three and work your way up!

The worst thing you could do is nothing. Take purposeful action with the expectation that your results will be slow, steady and permanent. Your body doesn't want to deal with creeping obesity or slow, steady weight gain anymore than you do.

When you take action, stick with the change you make for at least 3 weeks. Remember, you won't see the changes as fast as you'd like, but your body will feel them. I usually recommend to make no more than three (3) changes at a time. Changing too much too soon can become overwhelming, creating a burnout of fatigue as you drive toward your goal.

If you don't know where to start, here are a few things you can do right now that will help get you on track.

Crash dieting is probably the biggest kiss of death for anyone trying to lose weight. In general, my clients who have a history of crash dieting have the hardest time losing weight. On the other hand, my clients that didn't diet much have very little trouble shedding fat.

Crash or fad dieting worked for them quickly for a while, but eventually their body's metabolism threw up a STOP sign. So please don't cut out macros (protein, carb or fat) as a whole, don't eat too little food, don't eat fat free and don't eat foods labeled with words that say "sugar free", "low carb", "keto", "diet", "calorie-free", etc.

Just eat real food. Real food doesn't come with bright labels and unbelievable claims. The problem is, we've become so conditioned to the misinformation on those food labels, we don't believe or don't give enough credit to the humble foods on grocery store shelves that don't make as boastful of statements.