The 2 Causes of a Stubborn Weight Loss Plateau 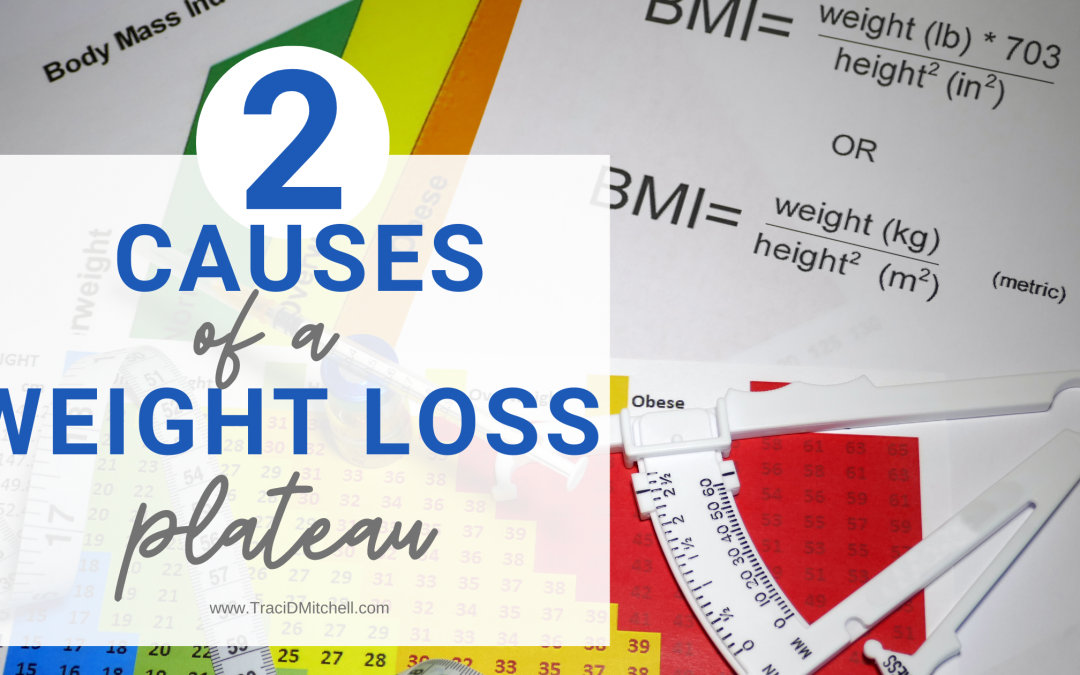 The mysterious weight loss plateau has been the thorn in the side of anyone who’s made progress losing weight, only to be stalled (or reversed) weeks, months or even a year down the road. Not only is it frustrating to see that your hard work simply isn’t doing the trick anymore, but it’s also demotivating and makes you question whether anything will work at all. So, what causes a weight loss plateau in the first place, and what can you do to overcome them?

Weight loss plateaus are lengthy stalled progressions toward a healthy goal weight that was established to reach in a reasonable amount of time.

This means progress has slowed to a crawl or stopped for far more than just a day or two. If you haven’t seen the scale budge in a month, you could be at or very near your goal weight, OR you’re not doing the right kind of work.

Stalled progress doesn't necessarily mean that things aren't moving down. You could still be making progress by 1/2 pound a week, which is still really great.

On the other hand, if your weight loss has completely stopped for weeks on end, and you're not near your goal weight, or if your weight has crept back up, you're decidedly at a plateau. There are 2 causes of a weight loss plateau that I'll get to in just a minute.

A great barometer of your weight loss is actually a measuring tape. Measure your waist, chest, and hips every couple of weeks. If you’re losing inches, you’re losing fat!

A Reasonable Amount of Time:

So often when people finally decide the weight really needs to come off and they’re willing to make big changes, some tipping point event has already happened. Maybe it was a visit to the doctor. Maybe it was not being able to fit into a pair of jeans. Maybe it’s a change in relationship.

The best kind of weight loss is slow and steady. It’s sustainable for loss, and will last longer. We’ve been spoon-fed that a good goal is two pounds a week. If you break that down by calories, you’re putting yourself at a 7000 calorie deficit, which is too much for the average person.

More often than not, the 20 pounds a person might want to lose came on over more than a year or two. Expect a slower weight loss of ½ pound to 1 pound a week, and you’ll see the results happen with a little bit of patience.

The 2 Cause of a Weight Loss Plateau

When weight loss stalls, it happens for one of two reasons:

Your body’s furnace just isn’t firing up the way that it should and you’re hitting a wall because of it. This sounds convenient because it takes the blame off of our habits and choices, but in reality, your body’s metabolism, or thyroid, or thermodynamics are unlikely to be the problem and is the case for very fewer people than you’d think. In some cases, there could be a thyroid hormone concern. This can be evaluated by a physician and determined by a blood test.

I say this all the time, but your body is amazing! It wants you to get on the right track and get toward  more optimal weight so you stay healthy. However, in order for your body to get back to that optimal weight, you have to do the work. The compliance problem means that you just haven’t stuck with the plan that was working for you.

Here are a few key “compliance” issues for you to think about:

An Open Door for Bad Habits

You let one or two bad habits creep back in. I like to use ice cream as an example. Let’s say that you cut out ice cream for six months (in addition to several other changes). You love ice cream so this is a big deal! But after six months, you had a bowl. No big deal. The next week, you had a couple of bowls. The next week, ice cream came back into your diet four or five times. Do you see where I’m going with this? Even though ice cream isn’t egregious in and of itself, the permissiveness of having it as frequently throws things in reverse.

You got frustrated. As you inched closer toward your goal weight, things slowed down or maybe never picked up the way you thought they would. So you quit even though slow progress was happening. It wasn’t fast enough. If this sounds like you, don't quit. If you're moving down on the right trajectory, keep with it. You're doing something right!

Stress Got the Best of You

You let stress get the best of you. Stress happens to the best of us and for just about any reason imaginable. Work-related, relationship-related, finance-related, family-related, etc., all open the door to stress that can increase the likelihood that you’ll rationalize away the moments you want to eat less healthy. If the bag of chips and a hot dog are more convenient than taking 15 minutes to make dinner, and you’re stressed, the choice is tempting. In most cases, stress is transient, or at the very least, can become more manageable. One of the easiest ways to help manage stress is by maintaining a healthier diet, even at times when you want to least.

Managing stress is always easier said than done, but overcoming the challenge that stress presents gets easier with time. Eventually the things that were so stressful, may be more manageable, or may not seem quite as big.

When Weight Loss Stalls, Do the Work

Very often, people will jump on the scale to see significant weight loss after the first week. When the trend follows the second and third week, the expectation has been set to see the same type of weight loss until the goal weight has been achieved.

When things stall or slow down after seeing great success in a short period of time, it doesn’t mean that your progress has stopped. It means that your body is regulating itself.

If you were someone who lost, let’s say, seven pounds in two weeks, it’s because you crash dieted (cutting calories too drastically), followed an extreme diet (i.e. keto), or had some inflammation weight to lose.

It is absolutely quite common for my clients to see seven pounds of inflammation weight come off in the first two weeks. If you lost more than you expected in the first couple of weeks of following a healthy eating plan, this is could be the case, but then things naturally slow down.

I always tell my clients that after the inflammation weight comes off, fat loss weight will follow, but it will be significantly slower - sometimes just ½ pound a week. But it’s still progress! A little bit of progress is still progress.

When you hit a weight loss plateau or just slow down a lot, this is when the rubber meets the road. This is when you have to dig in and do the work. You don't need to reinvent the wheel, or jump over to a new fad diet. Rather, persist. Keep doing what you were doing.