Artificial Sweeteners and Sugar Substitutes: Are They Healthy? 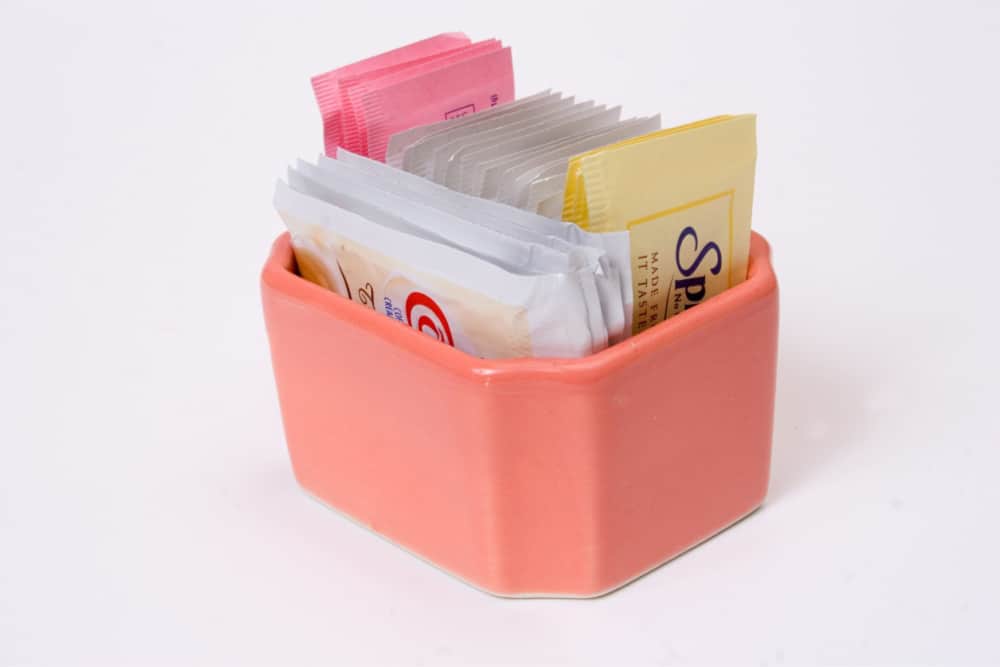 There is a lot of debate around artificial sweeteners - and whether or not they’re any good for us. We know they make foods and drinks sweet and are mostly calorie free, but do they actually help people lose weight and help to manage conditions like diabetes?

I jumped into this topic to see what the research said. Before you drink another diet soda or sprinkle the powder from blue or pink packets in your coffee - read this first.

In this article, I get into:

What Are Artificial Sweeteners?

Artificial Sweeteners are basically chemical sweeteners made in a lab. All artificial sweeteners in our food system today were invented within the last 100 years or so.

This makes them new to people. The full effect of artificial sweeteners is only being discovered - certainly in how they affect our health. In fact, some sweeteners are several hundred to several thousand times sweeter than table sugar. That’s powerful!

But what are these sweeteners and how do you know if you’re eating or drinking them?

Aspartame: also known as NutraSweet
Aspartame was first made in 1965 and is 200 times sweeter than table sugar.

Acesulfame Potassium (Ace-K): also known as Sunett or Sweet One
Ace-K was approved for food consumption in the United States in 1988 and is 200 times sweeter than table sugar.

Sucralose: also known as Splenda
Sucralose was approved for food consumption in the United States in 1998 and is 600 times sweeter than table sugar.

Saccharin: also known as Sweet N Low
Saccharin was approved for food consumption in the United States in 1958 and is 300 times sweeter than table sugar.

Aspartame + Acesulfame Potassium: also known as Equal
The combination of aspartame and acesulfame potassium as Equal was first sold in the United States in 1982 and is 200 times sweeter than sugar.

Neotame: also known as Newtame
Neotame was approved for food consumption in the United States in 2002 and is 7000 - 13,000 times sweeter than table sugar.

Natural no-calorie sweeteners, such as stevia and monk fruit (also called lou han guo) are both - at least at their origin - found in nature.

Neither of these require FDA approval for food consumption as they’re not synthetic. However, research around both of these products is still important.

Stevia is really popular right now, which means there is money to be made by big food.

Unless you don’t mind corn starch, sugar alcohols (more on those below) or fillers added to your stevia, be sure to only by pure stevia.

Monk fruit is sourced from a green gourd that can be found throughout parts of Southeast Asia. Like stevia, Monk fruit has been used as a sweeteners for hundreds of years.

What About Sugar Alcohols?

I'd be missing the mark if I didn't bring up sugar alcohols. Nope, they don't contain ethanol, so you won't catch a buzz off this class of sweetener, but they do add quite a bit of sweetness that does contain calories.

Technically considered a carbohydrate, sugar alcohols aren't digested entirely - which makes them appealing for people who are concerned with calorie intake. When a sugar alcohol is not fully digested, it can’t be absorbed the same way table sugar is, which makes it less impactful on blood sugar levels.

Like artificial or other calorie-free sweeteners, sugar alcohols are in a lot of food products from chewing gum, candy, mouthwash, toothpaste., etc.

First of all, if you've read anything I write, including The Belly Burn Plan, you'll know I harp on and on about eliminating sugar from our diets. Sugar is menacing. But I'm not so sure artificial sweeteners are an better.

Many will argue that point as aspartame, sucralose, acesulfame potassium and even saccharin - along with many others - are beneficial, especially since they’re generally recognized as safe (GRAS) by the FDA.

Despite this recognition, there are still many studies that show artificial sweeteners are actually detrimental to our health and may in fact cause weight gain.

Much of the research on all types of sweeteners that's been done has revolved around a few common areas:

Despite the fact that they don’t contain calories, artificial sweeteners have been shown to increase blood sugar levels as well as affect insulin response in obese people (2). Needless to say, this is a less-than-expected response, especially among people who need to manage their weight the most.

In fact, one study published in the journal, Diabetes Care, showed a 67% increased risk of developing type 2 diabetes among people who consumed artificially sweetened sodas (3). Wow!

One of the possible reasons that artificial sweeteners affect insulin is because it disrupts our microbiome. In other words - it messes up our gut - and the bacteria that’s in it (4).

The bacteria in our gut are with us from the day we’re born - and are always changing. One thing that affects our gut bacteria is the foods we eat and the beverages we drink. Stress and other lifestyle factors can also affect our gut bacteria.

We’ll always have some bad bacteria running around our gut, but the hope is that we have enough good bacteria to offset the bad stuff. Too much bad bacteria in our gut doesn’t just affect how well we go to the bathroom, but it also affects our immune system, mood and most definitely weight.

Because so much is happening related to the research around gut bacteria, it’s no surprise that a number of recent studies have been done showing that artificial sweeteners throw off the delicate balance of good to bad bacteria - increasing weight and promoting insulin resistance (5).

It’s reasonable to think that if you eliminate sugary foods from your diet, without the addition of calories from elsewhere, you’ll lose weight, right? In fact, the contrary seems to be the case. For both psychological (6) and physiological (7)(8) reasons, large-scale studies show that people gain weight - and significantly so.

On the psychological side, it seems that artificially sweetened foods don’t activate the brain’s food reward center in the same way that sugary foods do. In a nutshell, the brain of someone who just drank a diet soda, for example, doesn’t say - “I just drank this diet soda and I’m good for now.” Instead, the brain is busy thinking about how it can be rewarded with a different type of food or drink, leading to weight gain.

Looking beyond weight gain and obesity, more and more research has been done linking diet soda consumption and metabolic syndrome (7). Studies done in both the United States and Europe showed that people who drank one diet soda a day, in contrast to those who did not consumer diet sodas, were at a significantly greater risk for developing metabolic syndrome (also called Syndrome X).

Metabolic syndrome is a class of risk factors that increase the risk of developing heart disease and diabetes. These risk factors include high blood pressure, central obesity (belly fat), high cholesterol and high blood sugar levels. Since approximately 1 in 6 people develop metabolic syndrome - it’s something we should all be on alert for. In addition to eating lots of vegetables, drinking plenty of water, and in my opinion, eating right for your body type, cutting out even very small amounts of artificial sweeteners should be a high priority.

After decades of growing consumption of artificial sweeteners, the link between obesity, diabetes and heart disease is undeniable (8).

Sadly, children are not any more protected from the effects of artificial sweeteners than adults. Products from Pedialyte®  to Popsicles® contain artificial sweeteners. If your a parent or caregiver to kids, make sure you’re reading labels and only buying foods or drinks that don’t contain these ingredients.

In fact, kids who drink diet sodas, in contrast to their non-diet soda drinking classmates, have a higher overall body mass index (BMI) (9). BMI is simple a ratio of height to weight. Someone who is 5’4” weighing 120 pounds has a lower BMI than someone who is 5’4” and weighing 160 pounds.

Of course, over-consumption of sugar as well as artificial sweeteners, both need to be monitored in children. I’m hardly trying to suggest that kids who consume artificial sweeteners should start eating or drinking their sugar-laden counterpart, but both are contributors to an obesity epidemic that’s out of control.

Cutting Back on Sugar and Artificial Sweeteners

The perception of no calorie sweeteners, especially artificial sweeteners, is appealing because - at least in theory - we have a way to cut back on the amount of sugar we take in. After all, as a society, we consume far too much sugar!

That said, chemical sweeteners have side effects. Those side effects don’t seem to benefit our health, especially when it comes to weight loss.

The only tried and true way to avoid all the side effects of chemical sweetener, as well as the pitfalls of too much sugar, is to start cutting it out.

If you’re addicted to sugar, the road can seem daunting, but it’s certainly something we can all do. I’ve had clients who managed to wean themselves off sugar in just a few days, and others a few months.

No matter who they are, cutting back on sugar and artificial sweeteners only helped their health.

I wrote The Belly Burn Plan to help people lose weight, especially from their midsection. It’s a six week plan that reduces the amount of sugar in your diet, improves energy and cleanses your body of toxins that are slowing it down. Order it today!

This post contains affiliate links, which means if you click on them, I may make a commission.