Are Food Pushers Wrecking Your Diet? 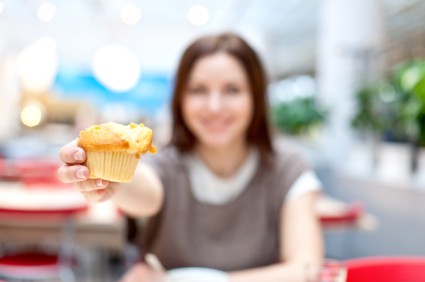 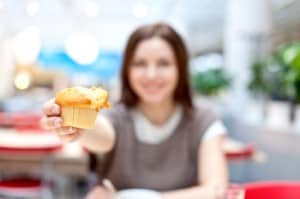 My Old Friend Paul
About ten years ago I was out to dinner with a group of co-workers. We were all away on a business trip and just wrapped up a lengthy conference. On the last evening of our trip, we were invited to attend a reception at a restaurant known to serve decadent food. I sat at a table of about 15 people, and sitting across from me was an older man, named Paul, who was the chairman of a committee I sat on.  He was in his early 70s, incredibly kind and very well-respected.  On either side of him were two co-workers from his home office. Dinner was served and we all enjoyed our food.

Just as I was ready to leave, the dessert cart came out. It was wedged behind my chair. I was stuck. The two co-workers that sat next to Paul each ordered heaping desserts, as did a few other people at the table.  I'm hardly judging anyone for ordering dessert, but what happened next really annoyed me. Since then, I've seen it happen countless times.

As the two co-workers desserts were laid out in front of them, they told Paul that he'd "have to try some of this." He politely said no and carried on with the conversation he was having. They persisted, and again he refused their offer, this time saying, "No, really I can't. It looks delicious, but I can't have any." Now, he wasn't salivating at the sight of their food, and he certainly wasn't being coy in the way he told them "no." This banter went back and forth a couple more times until he finally caved in, taking a bite of their dessert. Both of Paul's co-workers cheered as if they achieved something spectacular.

Paul's bite diffused the situation and everything went back to normal. As it turns out, Paul was a diabetic. He was perfectly fine after one bite of dessert. His co-workers may not have known this at the time, but should have respected his initial decision.

Food Pushers
We know them. We love them. But they are a freaking nightmare to a healthy diet.

Food pushers come from all parts of our lives, and don't necessarily "push" solely to sabotage our diet. But when we're around them and the boundaries aren't firmly in place, your healthy eating habits could topple in no time. Here's a quick, but not exhaustive, food pusher list. I'm sure plenty more could be added on!

The Crap-I-Don't-Want-to-Eat Food Pusher
This is the person that is always trying to push something new and avant-garde. They talk about their food of choice like it's the only food left on Earth and if you don't eat it you'll die. They research the food, research the restaurants that serve the food and research the celebrities that eat the food. This goes on until a hipper food comes along. The once "cool food" becomes passé.

The Sneaky Food Pusher
You're at a restaurant with a significant other (SO). You're eating healthy and go with the grilled fish, vegetables and brown rice. Your SO casually grabs a slice of warm bread from the table, butters it, then puts it on your bread plate. You're in the middle of a conversation and don't really pay attention. Your dinner arrives along with an extra meal-size appetizer that your SO "thought you might like." By the time you leave you've eaten a two pieces of bread, half the appetizer, your "healthy" meal and need to be wheeled out of the restaurant.

The Guilt Trip Food Pusher
"I made your favorite! Double chocolate super chunk-alicious peanut butter squares. I had to drive 50 miles to three different stores to get all the ingredients, but finally got it all together. Try one and tell me what you think. I made extra, so don't be shy." This one almost always comes from a loved one.  It's usually accompanied by a statement that's something like "You're looking a little thin," or "Your look pale, are you eating enough?" My only advice: stay strong.

I'm sure many of us have our list of food pushers, but it's how to deal with them that's the key. In all seriousness, stand your ground when it comes to eating healthy. If you've got your cravings in check and eat really well when you're not around food pushers, make it clear, before food even comes up, that you're not going to eat too much, eat junk food, or stray off your healthy diet.

Stress doesn't come in just one size. There is BIG

Bring on the vegetables and spices! This is such a

I would love to take credit for these words, but I