Exactly How and Why Does Alcohol Cause Weight Gain? 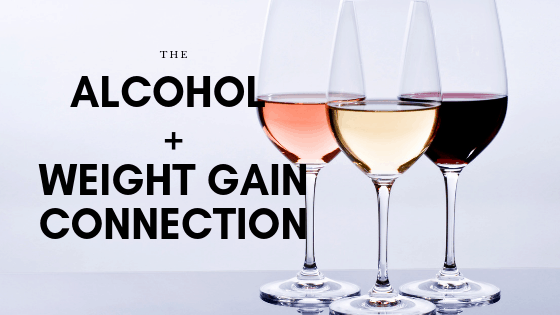 There is a lot of research out there on alcohol consumption. Many studies have shown the benefits of low to moderate drinking, while other studies have shown that even light alcohol consumption can increase the risk of disease. Both of these pools of study are probably correct because no two people are the same and we all have different chemistries. Naturally, alcohol will behave somewhat different in each of our bodies. That being said, the connection between alcohol and weight gain has its own individual effect on each of us, too.

Sounds tricky? Here's how that works.

Alcohol and Weight Gain: The Connection

First of all, I think it's important to establish that regardless of what research says about the benefits of alcohol, it's never good or smart to start drinking for your health. You can benefit your body in boundless ways by eating a healthy diet filled with vegetables and some fruits that contain many of the same nutrients or benefit otherwise found in alcohol.

If you're tinkering around with the idea of becoming a teetotaler, or just want to know that your every-now-and-then glass of pinot noir isn't devastating your belly area, this will help put you on the right track.

Moving along, here are the facts.

One gram of alcohol contains 7 calories. On a purely caloric level, this is a lot. The average glass of [fill in the name of your favorite adult beverage] contains 14 grams of alcohol (or 98 calories). But those 14 grams don't account for any other calories from carbohydrates, one of our three macronutrients.

Everything you eat or drink has to be metabolized. Our liver is the main player in just about everything related to food or drink metabolism.   So it's not just the calories in what you're eating or drinking, it's how efficiently they can be broken down.

Calories in What You're Drinking

This is a pretty simplistic look based on the calories in popular drinks and the amount of weight you could drink if you have one, three or five drinks of each per week.

Keep in mind, you could gain more or you could gain less. I'll explain that in the next section. In a nutshell, it all depends on what you're eating and the health of your liver.

As you can see, some drinks have more calories than others. A margarita contains nearly three times the amount of sugar as a glass of wine. While calories are not the most important thing to look at when considering what to eat or drink, sugar has a harmful impact on all of our bodies, especially when we drink alcohol.

If all calories were created equal, and you looked at the chart above, weight gain would make sense. And, in fact, weight gain DOES happen from drinking too much. But since our body doesn’t breakdown alcohol like any other food, alcohol makes our body gain weight in other ways.

The alcohol you drink is absorbed through your stomach and small intestines, but metabolized in your liver. The average person can breakdown, or metabolize, about 10 grams of alcohol an hour - so roughly shy of one drink.

If you have food in your stomach or if you are about to eat a meal as you're having a glass of wine, for example, your body throws up a huge stop sign on any sort of protein, carbohydrate and fat to make room for alcohol.

This makes sense. Since alcohol can have a damaging effect on our body, especially our liver, we need to pack it up and move it out as soon as possible.

A Simplified Scenario of How Alcohol Causes Weight Gain

You're out to dinner with a group of friends. It's 7:00pm and you're ready to relax. Over the course of the night, you enjoy three glasses of wine along with a salad and two slices of your favorite pizza. You leave the restaurant around 10:00pm to get ready for bed. You have a big morning tomorrow!

Even though the wine you drank only accounted for 375 calories, the alcohol has to be metabolized first, which will take a few hours. The pizza and salad amounted to (I'll be nice) 800 calories.

Your body will only be able to begin to breakdown the food you ate around 10:00 at the earliest. Unfortunately, you have to hit the sack because you're up early. Your body's natural metabolism starts to slow when you sleep because, well, you're sleeping - and that's your body's natural hormonal rhythm.

It's highly unlikely you'll burn very many of the remaining calories in your sleep, or before the next time you eat in the morning. Subsequently, there is a strong chance that the extra calories will get stored as fat.

Now, the scenario I used is wine, not sugar-loaded margaritas or carb-heavy beer. The additional carbohydrates in the beverages you drink also get suspended until alcohol works its way out.

Be aware of this, but don't stress about it!

The pizza/wine scenario could very well be what I do every few weeks with my girlfriends, too! I deserve it. You deserve it. But we don't deserve it enough for it to be a daily or an every-other-day thing. Moderation, as boring as it sounds, is super important.

Ah! I thought I'd throw in one more caveat just to make your head spin a little more. Alcohol is inflammatory! If you have chronic inflammation, it's important not to drink alcohol regularly. A glass of wine on the weekends is very different than a couple beers every night.

Do you have chronic inflammation?

All of these, along with many other conditions, are forms of chronic inflammation. Alcohol is not going to help any of these conditions, only make them worse or harder to manage.

It's quite possible for a drink or two to throw all the hard work you've done to eat healthier way off. A few years ago, a woman who followed The Belly Burn Plan got great results like many do. She stuck with the program and was shocked at how much weight she was able to lose just by cutting out inflammatory foods, including beer.

She wasn't a problem drinker, but enjoyed a beer or two every now and then.

After she achieved a good amount of success following The Belly Burn Plan (her body transformed), she went to a BBQ over one weekend and had a couple of beers.

Not a big deal, right?

It turns out beer is a big trigger for her. It could have been the gluten in the beer, or it could have been the alcohol, but she regained several pounds by the following Monday. It was more than just fluid retention as she was unable to lose the weight she put on until she abstained from beer long enough to get her body on track.

For the sake of transparency, I really like red wine. I don't like anything else, but I like red wine and drink a little very now and then. So if you see me out and about, come over and say hi, but don't be surprised if I'm sipping on a nice glass of red.

Want more tips like this? Traci D Mitchell is a healthy living and fitness expert. Follow Traci on Facebook. She’d love to see you there! Interested in working with Traci? She works privately with clients specializes in nutrition coaching and weight loss as well as functional fitness and personal training. All sessions are done via Skype or telephone. For more information, contact Traci here.

This post contains affiliate links, which means that if you click on a link, I may make a small commission that helps keep this blog going. Thank you!