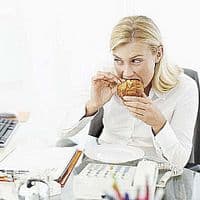 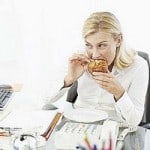 Sit up, look alive and wipe that drool from your face. If you felt great until lunch, but now you'll jump at the chance to catch a few Zs anywhere, chances are your diet is throwing you off.

Quantity and Quality of Carbs: I'll keep this short at sweet. Carbohydrates are a much-needed macronutrient to our diet, but be wary of the quantity and quality of the starches you choose.  Steer clear of starch-based lunches as they're definitely high in carbs and probably high in calories. Too many carbs or too many calories can throw your blood sugar levels way off, ultimately contributing to this feeling of sluggishness.

Eat this, instead of that:

A word about breakfast: The same rules generally apply to breakfast as well. You'll know you at the wrong breakfast is you feel a) tired or b) like you're hungry enough to eat cardboard two hours after your meal. Don't overeat and don't eat just carbs or very low fat. You'll regret it - and ultimately gain weight. Who wants that?

Like this post and want more of the same? Subscribe today! If you’re not connecting with me yet on Facebook, now is a great time to start. Beginning this February, I’ll be running my first ever blog contest – and I want you to be a part of it. There are some pretty great prizes and an impressive panel of judges – some of whom you may have heard of…especially if you’re a Biggest Loser fan. Get more details here.