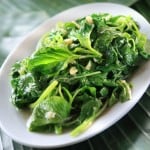 We all know that eating leafy greens is beneficial for our bodies, but did you know that spinach has been documented as a strong combatant against both ovarian and prostate cancers? According to the Journal of Nutrition, a carotenoid (the pigment that gives produce its color) in spinach has been shown to fight prostate cancer by dramatically destroying cancer cells. Similarly, a flavonoid (yet another type of pigment) found in spinach has been shown to reduce the risk of ovarian cancer. Spinach has also been shown to improve cardiovascular, joint and gastrointestinal health as well. What’s more, it’s a good source of fiber and low in calories, so eat up!

Add it into anything
Throw a handful or two of spinach into the following entrées or side dishes and you will be pleasantly surprised:
• Substitute spinach for lettuce on sandwiches or salads
• Add a bag of fresh baby spinach to a chicken stir-fry
• Coarsely chop a cup of spinach and add it to a frittata or omelet
• Sprinkle on top of your favorite homemade pizza
• Simply steam on top the stove and toss with a little olive oil and sea salt

In a large skillet, heat olive oil over medium heat. Add bacon and cook until crisp. Remove spinach and set aside. Add garlic and cook over heat for one minute. Slowly begin to add spinach. As the spinach begins to wilt in the heat, add a little more until all of the spinach has been added to the skillet. Remove from heat and toss in bacon, then vinegar. Sprinkle with sea salt and serve.