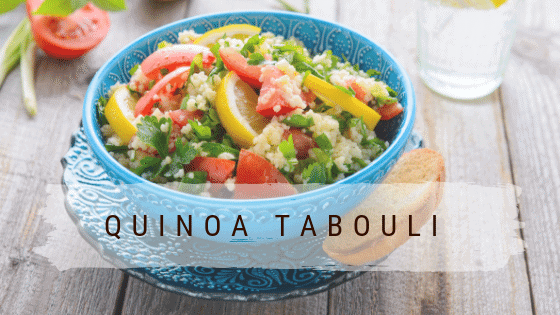 I went back and forth on this one...tabouli or taboulleh? According to Wikipedia, both are correct so I went with the shorter version.

Up until ten years ago, the most I ever saw of parsley was on the side of a plate served in a restaurant, or in my grandma's mashed potatoes - which were always amazing. That said, parsley, the main ingredient in tabouli, has long been known for its palette-cleansing properties. In fact, tabouli, a popular salad with roots in Lebanon, was always intended to do just that - cleanse the palette.

It makes an appearance on my blog simply because it's the granddaddy of detox recipes. I did tweak it a little bit by substituting quinoa for bulgur.  Here is a quick breakdown of the key ingredients and why they're so good for your body!

Parsley: What's in it? Vitamin C, K, beta-carotene and iron. Feeling bloated? It's also a great natural diuretic, helping to rid the body of any excess fluid.

Cinnamon: What's in it? Iron and calcium. Fluctuating energy? Cinnamon helps to regulate insulin levels, which will help keep all-day energy in check.

Combine all ingredients for the dressing in small mixing bowl. Wisk thoroughly. Pour the dressing over the salad. Toss thoroughly. Cover and let stand for at least one hour. Season with additional salt for taste upon serving.

*Bulgur wheat can be substituted using the same ratios as quinoa. 1 part grain to 2 parts water.

Check out all of my recipes at www.tracidmitchell.com under recipes.