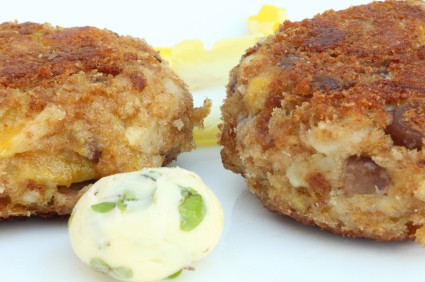 I really wanted to make a veggie burger that was gluten-free and easy to make. I opted for burger a with a corn meal base, but failed miserably at my first attempt. The burgers looked great, and the beans I used worked really well with the recipe, but the corn meal didn't have enough time to cook thoroughly. The end result was a very flavorful, but chalky round circle. I still ate two or three bites before I threw the entire batch away. The voice in my head sounded like Ted Allen from HGTV's Chopped...saying, "Traci, I'm afraid you've been chopped."

Back to the drawing board.

Then I thought why would I use a corn meal base when quinoa is so much more nutritious and is higher in protein? I grabbed a box of quinoa out of my cupboard and went to work. In all honesty, a friend recently told me about a quinoa veggie burger recipe she came across. It sounded great. Here is my take on a black bean and quinoa veggie burger (with a just a little bit of corn meal).

Preparation
Cook the quinoa. If you're not familiar with quinoa, it cooks the same as rice. While quinoa is cooking, mash the black beans (by hand, with a large fork or with a potato masher) in a medium-size bowl.  After the quinoa is done cooking, remove from heat and allow to cool for 10 to 15 minutes. Add quinoa, corn meal and 1 tbsp olive oil to black beans and mix well. Continue to mix in the red onion, cilantro, garlic, cumin, celery salt, cayenne pepper and oregano. Finally, add in the egg.

Form four round patties about one-inch thick. Refrigerate for about one hour.

Heat the two remaining tablespoons of olive oil in a skillet over low to medium heat. Add burgers to skillet and cook for 5 to 7 minutes on each side.