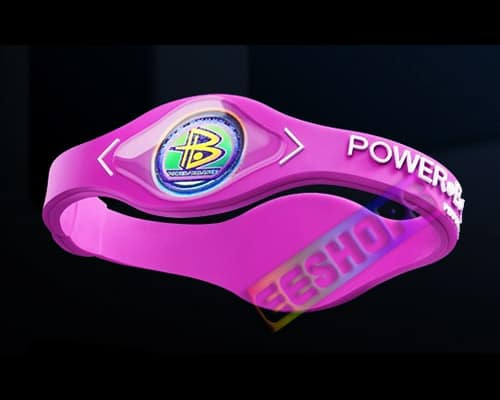 Yesterday afternoon I was watching the Bears get pummeled by the Packers at a friend’s house. I’m not exactly what you would call a “football encyclopedia,” but I did manage to find some high points in the game – as well as some areas of interest, including the Smurf-size wristband worn by Bears’ third string QB, Caleb Hanie when he came into the game to relieve Todd Collins (who apparently sucks) who came in to replace Jay Cutler – who was taken out because of a scraped knee. Is that about right?

This wrist accessory, called the Power Balance™ wristband, is essentially a silicone bracelet with a hologram faceplate. The wristbands have been around since 2007 and have become increasingly popular among A-listers from Shaquille O’Neal to Kate Middleton. In theory, when the hologram comes in contact with your skin, it’s supposed to work with your body’s natural flow on energy to enhance strength, flexibility, power and endurance.

For the most part the product has been panned by critics. I have yet to read a solid string of uncompensated reviews that praise its effectiveness.  The company’s website defines the bands are something that are “made by athletes for athletes, Power Balance™ is a favorite among elite competitors, weekend warriors, and everyday fitness enthusiasts.”   I’m a huge advocate of holistic health care and will hold off on sounding my opinion until I’ve tried the wristband for a while.

That said, even though the Power Balance wristbands have gotten a lot of slack, people still continue to wear them, including Hanie, who really didn’t play that bad. In fact, I’d argue that the game could have had an entirely different outcome had he been in the game earlier!

I will be watching the Packers play the Steelers in a couple weeks…keeping a close eye on everyone’s wrist.

If you’ve used or use a Power Balance wristband, let me know! I’d love to hear what you think.