Going for a Run? Don’t Worry (as much) About Water Intake 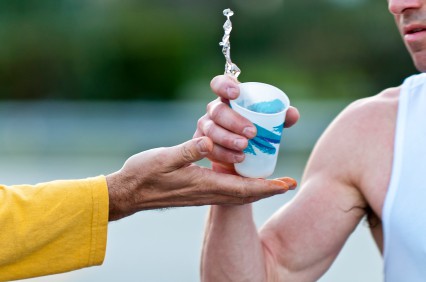 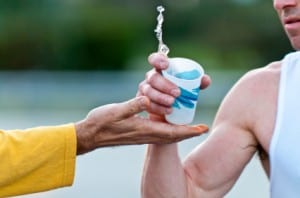 Last week I came across a study done by the Loyola University Health System that examined running and hydration. How much fluid is too much? The study suggests that nearly half of all recreational runners are drinking too much, which puts them at a greater risk of hyponatremia (due to excessive water intake that throws off, sodium - an electrolyte - in the body).(1) Sports drink companies have made a killing selling us on the importance of maintaining electrolytes. Propaganda aside, maintaining balanced electrolytes is critical to our health, but do we really need to guzzle the Gatorade® or water when we're out for a run? Lara Dugas, PhD., exercise physiologist and co-author of the Loyola study says no.

Dugas' advice is simple: drink when you're thirsty. According to Dugas, our bodies sit in perfect physiological homeostasis, with all electrolytes maintained. "Drinking when you are not thirsty to avoid dehydration is a myth. Also a myth is this notion that if you are thirsty you are already dehydrated. Thirst is the bodies signal to drink something, that's how we are designed."

Dugas is one of many research authorities that shun the idea of re-hydrating at every water stop along a race course. A similar study of the 2002 Boston Marathon revealed that 13% of runners suffered from hyponatremia after the race. That 13% is representative of over 1800 people who drank too much for their body to regulate. Dr. James Muntz, internal medicine service chief with The Methodist Hospital in Houston suggests, “During the marathon a good rule of thumb is to drink about one cup of fluid every 20 minutes. Drinking any more than that over the course of the race can get you into trouble.(2)

Exercise physiologist, Elizabeth Quinn suggests that long distance endurance athletes, including marathon runners, increase salt intake prior to a race and drink a sodium-containing fluid during an event.(3)

What about performance? Dugas says "If you watch the elite athletes running marathons, you will notice that they don't really drink during their marathon distances. They may pick up a water bottle and slosh the water around then spit it out. The hydration myths have been perpetuated by the sports drink companies to make you feel like you have to be well hydrated to exercise. It's absolutely not based on fact. The bottom line is that if you are thirsty you should have something to drink."