It’s Pronounced KEEN-wah…and here’s a great recipe for it! 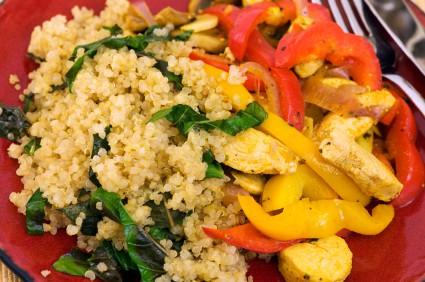 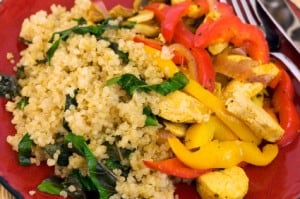 One of the things that I try to do when I write about healthy eating is to steer clear of diet foods. This may sound like a bit of a contradiction, but in my humble opinion there is a big difference between dieting and eating healthy. The star of this post is Quinoa (pronounced KEEN-wah). It’s a high protein grain that’s gluten-free and a really simple alternative to rice or pasta.

As more and more people have difficulty digesting gluten, quinoa has really gained in popularity. But there are a lot of reasons for those of us who don’t have a problem with quinoa to indulge.

Did You Know that quinoa provides a large enough absorbable amount of protein for our body to use that it’s actually considered an equal to milk by the United Nations’ Food and Agriculture Organization.

Quinoa is packed with:

It's Low on the GI Another fantastic benefit of quinoa is it’s lower on the glycemic index (GI), which means it can help to regulate your blood sugar levels better so you won’t feel a post-meal crash after eating. Unlike brown rice and whole wheat bread, both with a GI measurement of 50, quinoa’s GI measurement is a mere 35. This, by most standards, is considered low and an excellent source of carbohydrate for diabetics, hypoglycemic or those who are watching their waistline.

Did You Know that Quinoa was once called the gold of the Incas?  Although commonly considered a grain, quinoa is actually a relative of leafy green vegetables like spinach and Swiss chard. This nutty tasting seed contains all nine essential amino acids – which makes it a perfect protein! Quinoa is a healthy and tasty choice and is a great complement to just about any meal.

Quinoa is super easy to cook with, and it doesn’t take long to make. Here’s a simple salad that also works as a substitute on lunch salads as well!

1. Add quinoa to boiling water or broth; reducing heat then cover and simmer 15 minutes until water is absorbed.