Scale Crazy: 8 Tips To Manage Weight Without Using A Scale 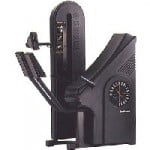 Anyone remember this machine?

When I was in college, I used to workout in my dormitory's fitness center. I joined it for something like $60 a year (if that). It was cheap, open long hours and easy to get to...just an elevator trip away. That was college, and I wouldn't exactly refer to myself as "fit" at that point in my life, but I made an effort once or twice a week. Every now and then I'd get on these streaks where I'd workout consistently for two solid weeks - most likely the result of a few too many cheese-dipped late night breadsticks. That would eventually fade, and I'd be back to my once or twice a week 'ease-the-guilt' workouts. Times change.

The fitness center was pretty small, with just the basics. There was a decent size strength training area with a bunch of machines and dumbbells. Then there was a smaller cardio room that had a couple stairclimbers, one treadmill  and two Stairmaster Crossrobics machines. The Crossrobics machines really worked my tush. I would lay (yes, lay) on this machine for 45 minutes pushing paddles at  varying levels of intensity. I seriously doubt I'd ever be caught dead on one of those machines today. I haven't seen a Crossrobics machine since my college days. If memory serves, the stair climbers were always taken and the treadmill was too much work (not a very good runner at the time). I would say the only other piece of equipment in the fitness center that got regular use was the scale.

When I did workout, it was usually around the same time of day, so I'd often see the same people. I remember there being one woman who always came down to do a really long workouts. Every time I was there, she was there. Her ritual was exactly the same. She'd come down, jump on the scale, workout for about 90 minutes, walk back over to the scale to weigh herself again, then leave. That's right, she weighed herself two times, every single time she worked out!

I completely get wanting to weigh yourself before and after working out to see, perhaps, how much weight you lose - just for the heck of it. I've even done that when I know I'm doing a really hard training set. I'm interested to know how much I lose, particularly in fluids, and how much I  need to replenish afterward. While it's not something I see all the time, I still catch some women weighing themselves before and after workouts. I'm sure a few men fall prey to scale-hopping, but it's highly likely it's not as frequent as what we women do. In my opinion, too frequent use of a scale isn't helpful and it puts people on the fast track to obsessively unhealthy behavior. What's more, people who weigh themselves too often place far too much value on the number they see on the scale instead of their health.

I can't tell you the number of women I've worked with who gain somewhere in the neighborhood of two to five pounds before getting their periods, only to have that weight magically disappear shortly afterward. The mental anguish they go through when they see they've gained weight, albeit temporary, is palpable. It's unsettling to see the scale creep up, and no matter how hormonal the reason may be, we're likely to think it's because we've genuinely gained weight that's on our hips or waistlines to stay. Sure, we can all gain a pound or two in a week if we're not eating right, but if you listen to your body in any way, there is no need to get on a scale more than twice a month.

Weight is a real issue and I don't mean to diminish the importance of knowing how much you weigh as a baseline, but in my opinion, it's far worse to know what you weigh every 24 hours. It's quite possible to weight six ounces more in the evening than in the morning. Then there are scale promoters! I know of well known fitness professionals who encourage people to weigh themselves every day as a means of controlling weight. Incidentally, one such person is a man whose primary clientele are women.

People can gain weight with our without the use of a scale. Sure, scales are great to check in with every now and then to make sure we're on track, but again, eating right and exercising enough will keep you healthy and happy.  The bottom line is scales don't measure health, they measure a number. That is it.

I can't say that I weigh myself all that often. Definitely when I go to the doctor, and then probably every few months or so. If you're the type of person that weighs yourself every week and knowing what the number is doesn't throw you off kilter, great - keep it going. But if jumping on the scale makes you want to pull your hair out because you might have gained a fraction of weight, then stop. Step away from the scale and take a breather.

Here are eight tips anyone can follow to stay scale-free and healthy:

1) Keep a food journal. Incredibly important, and keeps you way more accountable than a scale ever could. A scale can NOT distinguish between 300 calories from Doritos vs a chicken breast with vegetables.

2) Drink water. At least six times a day, preferably 15 minutes before you eat.

3) Exercise vigorously. At least three times a week. Work up a sweat. Make your muscles burn. Jump start your body this way.

4) Eat protein often. Some people need more protein than others, but eating a little bit of protein in every meal or snack will keep insulin, your fat storage hormone, from getting out of whack.

5) Sleep. Sleep helps your muscles repair. It improves your body's ability to efficiently burn, not store, unneeded calories. Sleep is king and anyone who says "they're fine" on five or fewer hours doesn't pay very close attention to what's good for their body.

6) Don't workout like a fiend. Exercise is super important, but you don't need to hit the gym three hours a day every day with no rest or time for your body to repair. There is such thing as too much of a good thing - and exercise is one of them.

7) Break out the tap measure. Think you're putting on unhealthy weight? A tape measure is far better and telling you this than a scale every could. You could gain muscle and gain weight, but lean up at the same time. Definitely not something to lose sleep over. Use a tape measure around your natural waistline, thigh, chest or bicep every couple weeks. If you're goal is to lose fat and get healthier, a tape measure will quantifiably give you this info.

8) Smile for the camera. The only person who needs to see this type of photo is you, but taking a shot of yourself in front of a mirror is your undies is a reasonable way to measure fat loss. I stress 'reasonable' because true fat loss/muscle gain does not happen over night. Go easy on yourself and take a shot every month or so for six months. Compare month one with month six. If you've been doing the work, you should be happy with what you see.