Flywheel v SoulCycle: The Calorie for Calorie Burn Off

I had a chance to take classes at both Flywheel and SoulCycle - both indoor cycling studios. I took the Flywheel class in Chicago's Gold Cold neighborhood last Tuesday and SoulCycle on Saturday in New York's Upper East Side neighborhood. I from Chicago and typically do not travel to a different part of the country to take a classes , but I happened to be in the Big Apple with friends and thought I'd give it a shot.

What's the Difference Between SoulCycle and Flywheel?

Both are fast-paced indoor cycling classes - similar, but not quite the same as a garden-variety spinning class. Both classes use light hand weights to break the class up by throwing in upper body strengthening exercises. Flywheel uses two and four pound bars that are neatly tucked away toward the front of the bike...I didn't even know they were there until our instructor asked the class to grab them. SoulCycle uses small dumbbells that are placed under the seat.

Flywheel's "never coast" philosophy means that energy and the rider's power output stay high throughout class. The class is set up like a stadium, with bikes surrounding the instructor's stage in a semi-circle shape. The instructor selects the music. Alicia, our instructor, chose a a bunch of fun songs to keep us energized- even going old school, including Technotronic's "Move This" (remember that?). The Flywheel class pushed RPMs really high, but also incorporated some tough hills that slowed our legs down quite a bit. A computer measured our power output, so there was always something to reference in terms of how hard we were working.

SoulCycle's class had a cool zen vibe to it. It was sort of like listening to a yoga instructor...on a bike. But it worked. Energy was really high and the music was good. Music will make or break a class for me, so it's really important. We started with Aerosmith's "Dream On," but then built in artists like Kanye West and Snoop Dogg. It was pretty eclectic. Our instructor, Maya, was a lot of fun and managed the packed Saturday morning class with a great attitude.

I wore my heart rate monitor for both classes. I'm more curious to see how high my heart rate got in each of the classes (both in the mid 170s). Even though I don't base the quality of a class (or any workout) on the calories burned), since I had the calorie output, I thought I'd post it. 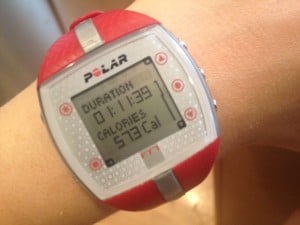 Calories burned in a one hour Flywheel class.

The class I took at Flywheel was only one hour, but I started my monitor about ten minutes before class. I really just sat around, so the calories burned were nominal. Based on this (and this is very unscientific), the total calories burned per minute during Flywheel were 9.55. The benefit in terms of what it did for my body, came from my heart rate getting pushed up through vigorous exercise, then dropping down while climbing hard. 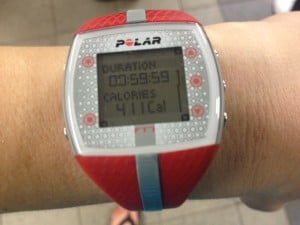 Calories burned during a SoulCycle class.

The class I took at SoulCycle was 45 minutes, and I started my monitor about ten minutes before class again. I burned 9.13 calories per minute during this class.

I taught spinning classes for seven years, and in that time, I don't think I once measured how many calories I ever burned. Even though the philosophy of both types of classes are different, riders turn their legs over really fast. I was really happy with both classes and loved the energy in each of them. The quality of the class was also really great, which made the difference.

Traci is a nationally recognized health and fitness expert who has been featured on The TODAY Show, Dr. Oz, Oprah.com and SHAPE magazine. Traci is available for corporate speaking events and wellness coaching, as well as private training. Contact Traci here.