My Favorite Shoe for Exercise: Broken Down & Beat Up 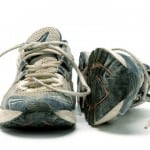 Last year while running a half marathon in Chicago, I spent some time talking with a guy who was running barefoot. The ball of his foot was taped to protect his skin from glass and debris. Clearly, I wasn't racing hard, or I wouldn't be chatting with a stranger about his lack of shoes, but I was just talking with someone about barefoot running and was really curious to know if this person was in agony or not. This particular half marathon was the second weekend in June and the temperature was really hot. When I saw him running, the first thing that came to mind was hot hot his feet must have been. As it turns out, he was indeed uncomfortable, but more so from the heat - as I think we all were. He said his feet did hurt a little, but they were much more conditioned than what they had been. He was prepping for a series of long(er) races in the future, and needed to build up some endurance running barefoot.

He was one of many people I've seen run barefoot. I think the very first person I ever saw run barefoot was actor Lou Diamond Phillips 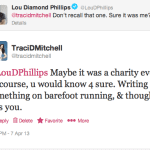 (La Bamba, Young Guns, Rachael vs Guy: Celebrity Cook Off) in a celebrity track event in the 80s. [THIS JUST IN: I tweeted Lou to ask him, and he's not exactly sure what I'm talking about...who knows, but it was someone circa 80s]. At that time, running shoes didn't have a sliver of the technology they have in them today, and I remember wondering why on earth he wouldn't wear shoes. I was a little kid at the time and probably had a pair of velcro sneakers somewhere in my closet. I was hardly a person to judge.

Fast forward 30 years of so, and I now own a pair of Vibram FiveFingers, a pair of racing flats, and another pair of minimalist shoes. I've always been under the impression that each and every one of us need to run in a pair of shoes that offer some level of support, dependent on our gait. I have had plenty of other running shoes, most of which are for over-pronation (foot rolls in too much). One way or another, I always ended up with pain in some part of my foot or leg resulting from my shoes - as "good" as they were for me. Depending on how much I ran, the pain would vary from ankle, shin, knee and hip. It would never be bad, but it would linger - regardless of how new my shoes were.

While I doubt running shoes will ever vanish from existence, people like my husband (who also works in fitness, and is really into body mechanics) would say that the best pair of running shoes a person could own is the most beaten down pair or running shoes with the least amount of support possible. You can apply the same type of shoe to any form of exercise. Of course, soccer cleats and basketball high tops serve a purpose specific to their sport, but in general, the support that comes from the soles of the feet should be as minimal as possible.

The only reason I would say barefoot running isn't my thing (for now) is because I don't want to cash my feet running on the somewhat questionable sidewalks of Chicago. Even when I go up to my parents' house in norther Wisconsin, I'm dodging road kill in the form on snakes, dragonflies and the occasional turtle. I like Vibrams (glove-like shoes) as well, but my toes feel all funny when I try running in them. That's just me, of course, as I've seen plenty of people smoke by me during a road race running really fast in them.

Benefits of less support in shoes

Lately I've been running in either minimalist shoes (shoes with very little support, like roll bars and arches) or a beat up pair of Asics that I've had for ages and wear often. For the last year, I've had no pain whatsoever.

From the ground up, it's really important to understand that if we have weak feet, ankles and knees, injury to the rest of our body is greatly increased. Shoes that offer a lot of support, regardless of the form of exercise they suit, reduce the need for our body to manage the deficit. If you have weak arms or a sore elbow, for instance, the goal should be to rehabilitate it to regain better function or strength. Feet are (or should be) no different. Yet how often do we really think about strengthening our feet, including our toes?

Less support in shoes, or running with minimal support - including barefoot - naturally forces your body to recruit the muscles, ligaments and tendons to get stronger. When feet get stronger, so do ankles and hopefully shins, knees and hips, too.

Who should wear minimalist, low support or barefoot-style shoes?

Barefoot running or exercise may not be for everyone, but everyone could certainly benefit from strengthening their body from the group up. That said, moving from a shoe that has a lot of support to a shoe with minimal support should be done gradually and not overnight - regardless of who you are. It might take a few months to develop the necessary strength in your foot and ankle.

A good way to start building strength is to do warm up exercises without shoes on at the beginning of your workout. A few examples of exercises to do shoeless that will help to develop strength and mobility include:

After a month or so of consistent exercise, you might be ready to graduate to a shoe that offers a little less support. Eventually, you may be ready to go to a minimalist shoe. Again, it's really important not to make the leap from a full support shoe to a minimalist shoe overnight, or you could end up injured. Regardless, taking a little extra time a few days a week to strengthen through the lower third of our bodies is nothing but beneficial.